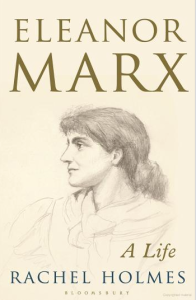 Book review: 'Eleanor Marx: A Life' by Rachel Holmes (Bloomsbury 2014, £25) by Alex Miller This new and very well-written biography tells the story of the life of Eleanor Marx (known to her family and friends as “Tussy”). Tussy was the third and youngest daughter of Karl and Jenny Marx, and the first part of the book deals with her childhood in London, and recounts her growing up in the financially insecure and often poverty-stricken Marx family home, where she rubbed shoulders with the likes of Friedrich Engels and William Liebknecht.

That part of the story is relatively well-known through the many biographies of Karl Marx that have been published over the years. The story of Tussy’s adult life is less well-known, and Rachel Holmes seeks to right this, with the first full-length biography of Tussy since the 1970s.

Tussy was in fact a remarkable woman in her own right, and although she had only four years of formal education, her home-schooling in the Marx household equipped her to make a number of very important contributions to the theory and practice of socialism.

Her first love was Prosper-Olivier Lissagaray who played an active part in the 1871 Paris Commune and whose History of the Commune is still regarded by many as the definitive eyewitness account of the world’s first working-class government and its brutal suppression. Tussy prepared the revised edition of the History for publication in the 1880s, and also published the first translation into English of Flaubert’s great novel, Madame Bovary.

Tussy also helped organise the first performance in Britain of Henrik Ibsen’s play A Doll’s House, in which she played the part of Nora Helmer (George Bernard Shaw also took part). Ibsen’s work was a major inspiration for the feminist movement, and Holmes sees the essay ‘The Woman Question: From a Socialist Point of View’, which Tussy co-authored with her partner Edward Aveling, as constituting perhaps her greatest contribution to modern socialism.

Indeed, Holmes argues that the book deserves a place alongside famous works on gender and society such as Mary Wollstonecraft’s A Vindication of the Rights of Woman and Engels’s The Origin of Private Property, Family and the State.

Indeed “Eleanor Marx was the foremother of socialist feminism: feminism began in the 1870s, not the 1970s”. In The Woman Question Tussy argues that there can be no true feminism without socialism: while the demands for equal rights made by middle-class women should be supported, the predicament of working class women should be at the centre of any campaign for gender equality.

As Holmes puts it: “Bourgeois women’s resistance tended to be reactive—they challenged their men—whereas working women had to be radical and challenge the whole society”.

However—and this is as important today as it was in the 1880s—“the struggle for women’s emancipation and the equality of the sexes is a prerequisite for any effective form of progressive social revolution”. So, not only can there be no true feminism without socialism, there can be no genuine socialism without feminism.

And it can’t wait until the revolution, it has to be part of the process that leads to it: “emancipation from sexual oppression cannot be brought about only by legislation and through political organisation. From the socialist point of view, feminism has to begin in the family, home and community”.

The book details the many contributions that Tussy made to the working-class cause, including the leading role that she played in organising a number of key trade-union struggles at the same time as she was contributing to her father’s political legacy (for example, by assisting in the first translation into English of Capital and preparing Marx’s famous pamphlet “Value, Price and Profit”, which she found among her father’s many chaotic manuscripts).

But her story ends in tragedy. Her partner Aveling was a genuine bad apple and regarded by Tussy’s friends as repellent and untrustworthy. Financial impropriety appeared to follow in his footsteps wherever he went.  He married another woman behind Tussy’s back, and Tussy’s life came to an end in 1898 when she apparently committed suicide by taking prussic acid following a painful confrontation with Aveling.

Many of Tussy’s friends—including Karl Kautsky and Eduard Bernstein—suspected Aveling of murdering her in order to get his hands on the money Engels left to her when he died.

Holmes’s book has some minor drawbacks: there could certainly be greater clarity about the distinction between Marxism and anarchism, for instance. Despite the occasional unclarity on matters of political theory, though, Holmes has produced a fine biography.

Eleanor Marx’s life and work deserve greater recognition and this book deserves a wide readership. At the moment, it’s only available as an expensive hardback, but a paperback edition is due to be published in May 2015.