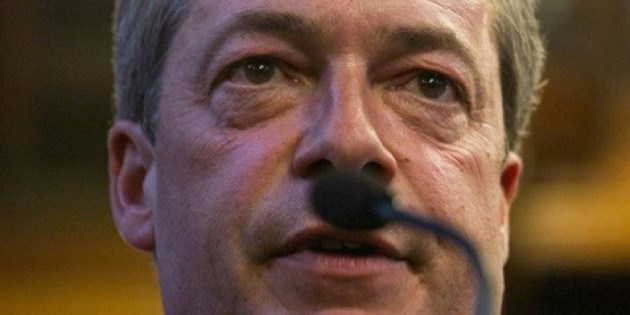 UNHOLY ALLIANCE: any anti-EU camp will include the likes of UKIP's Nigel Farage

by Bill Bonnar Britain is a capitalist country operating within the EU. If Britain decides to withdraw from the EU it will still be a capitalist country. The principle aim of the left is to transform Britain from capitalism to socialism. This may seem a moot point but there is a point to this moot point. For the left, its stance on the EU is not based on principle but rather tactics and strategy.

In the first referendum in 1975 the entire left campaigned for a British withdrawal. Most of the left supported the idea of a ‘British Road to Socialism’ based on the concept of a left Labour government supported by a mass movement outside parliament implementing a socialist programme.

The EC was seen as a barrier to this project; undermining national sovereignty and acting as a block to its radical programme.

In the course of the 1990s, much of the left altered its position. While still highly critical of the EU it did not call for withdrawal but rather posed an alternative vision of a social and progressive Europe.

In part, this was a response to Thatcherism. Under Thatcher, Britain moved considerably to the right, compared to most other EU countries.

In fact, many aspects of the EU now seemed progressive in comparison. It was also a response to a growing right wing opposition to the EU.

Across Europe the radical right became the main vehicle for anti-EU sentiment in which opposition to EU membership became enmeshed with a heady mixture of racism, right wing nationalism and xenophobia.

This was a direct response to the Maastricht Treaty, which allowed for the free movement of labour and a massive rise in migration between European states.

Sometime in the next 18 months, the Conservative Government will hold a referendum on Britain’s membership of the EU. This agenda has been driven by a hard core of Tory MPs and members, fuelled by sections of the media determined to orchestrate a British withdrawal.

This position enjoys significant support among the British public; a section of society for which racism and xenophobia are common currency.

Opinion polls show a majority of the electorate in England would support Britain remaining in the EU but that majority is not large. In Scotland, the pro-EU majority is much more commanding.

If the left were to adopt an anti-EU position it would face an obvious problem in the general nature of the anti-EU campaign. It does not take much of a leap of imagination to picture what that campaign would look like.

Imagine a large demonstration, festooned with Union flags and marching to the tune of Rule Britannia. It would be a campaigned driven by the most reactionary sections of British society; an unholy alliance of UKIP, renegade Tories and the Daily Mail. For all those who fear the rise of English nationalism, it would be as if their worst nightmares had become real.

The problem for the left is that, although they have a strong critique of the EU and could make a compelling case for withdrawal, they would end up objectively supporting the above because there will be only one anti-EU campaign.

And yet the left’s critique of Europe remains valid and has intensified in recent months over the EU’s treatment of Greece.

Here was a government elected by its people with an anti-austerity programme massively endorsed in a referendum being forced to ignore the will of its own people on the orders of Brussels.

In Scotland, anti-EU sentiment is much less, with opinion polls showing a clear majority in favour of Scotland remaining a member. This is likely to increase in the course of a referendum campaign in which all the major parties and almost all the media will campaign to stay in.

For the left in Scotland, there is much discussion needed as to what our position in the referendum should be. Eg, if Scotland where an independent state and not a member; would we campaign to join the EU? Almost certainly not.

In the coming referendum, our position needs to be informed by the following: what is our socialist critique of the EU, and has that critique been altered by recent events?

Given that the British anti-EU campaign will be driven by reactionary forces and that most progressive forces in Britain will certainly coalesce around a pro-EU position, how does this affect our stance? Where does this issue fit into the current campaign for Scottish independence?

To deal with some of these issues, the SSP will be holding a one-day event, to be held before the end of this year. Its purpose is for the party to look at its existing position on the EU and discuss whether this is still viable; then to take that discussion into the wider movement.

In the coming months, this will prove to be a crucial debate for the left and one which the SSP intends to lead.