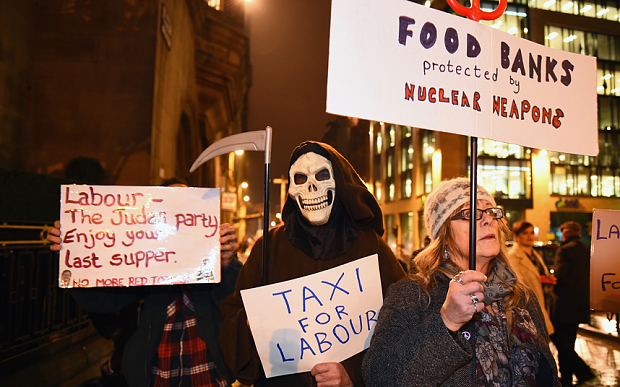 by Katie Bonnar Hindsight is a wonderful thing. Labour’s Gala Dinner in Glasgow was envisaged to be a chance for the party to make sure they got the credit for saving the Union while raising some money from their rich friends. Instead it looked more like a wake with the party in meltdown and leaderless and MPs looking nervously at each other wondering if this will be their last supper.

Meanwhile, hundreds gathered outside to show them that the people of Scotland will not forget the role they played during the referendum campaign. Some protesters came from food banks and happily took donations from passers-by while those inside spent upwards of £200 on their meal.

Since 18 Sept, when huge numbers of hitherto Labour voters moved into open rebellion against the party, they have lost their local branch manager and, if the polls are to believed, she will be joined by most of her MPs next May. Maybe for their next Gala Dinner they should play safe and book McDonald’s. At least they’ll get a ‘happy meal’.