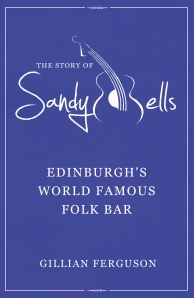 Book review: The Story of Sandy Bells: Edinburgh’s World Famous Folk Bar by Gillian Ferguson. Published by Troubador by Allan Armstrong Sandy Bell’s on Forrest Road is “Edinburgh’s World famous Folk Bar”, as the subtitle to Gillian Ferguson’s informative and entertaining new book, The Story of Sandy Bells, tells us. Gillian is not exaggerating. Traditional and folk music enthusiasts do come from all over the world to visit Sandy Bell’s: “The traditional music department at Tokyo University recommends Sandy Bells to students visiting Scotland.”

Visitors have included performers from groups such as The Chieftains, Clanaad, Clancy Brothers, De Danaan, the Furies and Planxty from Ireland, whilst Emmylou Harris played in the bar in the early 1990s. Those just coming in to be entertained have included Yehudi Menuhin and Eric Idle.

Up until his death 2002, in Hamish Henderson was always at the centre of Sandy Bell’s performers and imbibers! In the late 1940s he helped to launch the Edinburgh People’s Festival, which included performances the plays of Communist folk singer and songwriter Ewan MacColl. “Performers often found their way to Sandy Bell’s.” This when was when the bar first became associated with traditional and folk music.

Hamish, inspired by Italian Communist, Antonio Gramsci, understood the importance of popular culture. He founded the School of Scottish Studies, with its official premises in George Square. However, “he often referred to Sandy Bells as his ‘office’”. He was frequently to be seen regaling the assembled company. Many, at Hamish’s prompting, went on to become very well-known artists, including Jean Redpath. Others, who began performing in Sandy Bells, went on to greater public acclaim, including Aly Bain, Phil Cunningham, Barbara Dickson, Kris Drever and Dick Gaughan. Gillian’s fine book gives us many more examples.

There are also many amusing anecdotes in the book. As with so many other howffs, owned by the big brewing chains, there was continuous pressure to ‘modernise’. Attempts to introduce “a juke box, fruit machine and a television” were met by direct action. They all ended up on the street! As Dick Gaughan wrote, Sandy Bell’s is “the only democratic pub in town where the regulars, the people who really count, dictate the rules”. Or, as former manager Jimmy Cairnie said, “This place is full of revolutionaries who want nothing to change!”

As someone who has been going to Sandy Bell’s, off and on, since the late 1960s, I found Gillian’s book a delight. The best place to buy it is over the bar at Sandy Bell’s. What better excuse do you need to listen in to one of the lively music sessions, drink fine ales or whisky, and enjoy the crack.

• Get the book from Sandy Bell’s or troubador.co.uk – see sandybellsedinburgh.co.uk