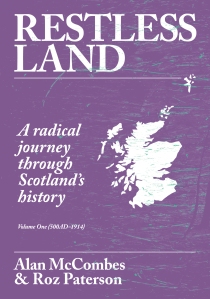 Book review: Restless Land – a Radical Journey Through Scotland’s History by Alan McCombes and Roz Paterson. Published by Calton Books, 2014 by Pam Currie Well, I thought when I agreed to write this review that I’d be starting with an apology. I got my hands on a copy at the Glasgow launch in late July, but in full indyref campaign mode, and returning to work last week as a lecturer in a chaotic post-merger college, I was quite sure I would never read the whole book in time to write a review.

After all, I’d tried to read plenty of books on Scottish history before, usually ending in dusty defeat around the third chapter – particularly if the book covered the period before the interesting bits of suffrage and the emergence of the modern Labour movement.

My attempts to wriggle out were thwarted, however, so I started to read with a little trepidation, despite the glowing reviews at the launch, and despite knowing that both authors are more than capable of telling a gripping tale. I shouldn’t have worried – this is a history book like none that I’ve read before (and of course, I finished it).

This is an incredibly readable book which will grab you from the opening pages. Half-remembered stories and vague Scottish heroes leap to life, and the book resonates not only with excitement but with anger, injustice and above all, the struggles of the Scottish working class.

Like many of my generation, attending school in Scotland in the 1980s and early ’90s, I learned virtually nothing of Scottish history at school. I knew lots about the Romans and the World Wars, and by the end of secondary school, could give you chapter and verse on the League of Nations and Manchuria (there was also an unfortunate incident in which I ‘borrowed’ a photograph of my great-grandfather in full Lodge regalia for a project on the Napoleonic Wars, but that’s another story).

But as far as Scottish history was concerned, it was limited to a handful of classes – most of those on local history, and at primary school. Scottish history was an aside, an irrelevance – something with which to fill a few hours when a supply teacher had to be drafted in.

Instead, my limited knowledge of Scottish history was mostly gained through our rich tradition of oral history, in song, poetry and storytelling, and in particular, through political activism. At the age of 16, I joined the Vigil for a Scottish Parliament, and there learned from an older generation of Home Rule activists – stories of the clearances, of Red Clydeside, of the Covenanters and the 1820 rebellion. To my eternal shame, it was only many years later that I understood the contribution made to Scottish history of the tall, frail gentleman who would emerge from a taxi with a bottle of whisky to donate to the vigil – it was Hamish Henderson.

The publication of Restless Land, therefore – by the independent bookshop Calton Books – is timed to perfection. I was one teenager, in a small outburst of protest for Home Rule after the 1992 General Election. In the current movement for independence, that experience is being repeated ten thousand-fold, not only in Edinburgh but in every village, town and city the length and breadth of Scotland. Nor is it restricted to the young – Scots of all ages are grappling with political ideas, debating our nation’s future – and learning of its history.

There are good reasons why the British state has done its best to exclude Scottish history from the curriculum. As Restless Land documents, it is not a happy tale, but one of loss, denial and injustice – and of resistance. The exploitation and bloodshed of ordinary people for the gain of the wealthy and the powerful, be those monarchs, faiths or political leaders, runs through the centuries.

The Treaty of Union in 1707 was a stitch-up from start to finish, while Scotland as it stands today – the vast majority of the population concentrated in the Central Belt; the West Coast blighted by sectarianism, the depopulation and loss of language and culture in the Gàidhealtachd – reflects a nation whose modern development was warped and distorted by the demands of its southern neighbour, and of the British Empire. It is difficult to teach this – any of it – in schools and colleges without risking the politicisation of the next generation; through knowledge, in the words of the deposed Australian Prime Minister Gough Whitlam, we ‘maintain our rage’.

The current SNP government have gone some way to redress this balance in history qualifications and through the introduction of Scottish Studies to the school curriculum, but the mainstream telling of history, with its “objective” writers who are nothing of the sort, is not enough. Restless Land needs to be in every school and college library, made accessible to the next generation.

For me, reading Restless Land was like having lots of little lights come on in my head. Finally, a book which could tell me the meaning of many of the songs and poems I’ve heard, of the half-remembered stories, of the slogans and names which have drifted down through the generations. The chapters gave frustratingly brief glimpses at times, although there is a bibliography of further reading at the end. This, of course, is the price of having a book which spans nearly 1500 years and which is actually readable by anyone other than academics (and which is small enough to read on the bus!).

We are promised a second edition near the end which will cover the Red Clydeside period in more depth – and hopefully also other, lesser told stories of WW1, like the Women’s Peace Crusades and the food protests in Dundee and other Scottish cities, written out of the current mainstream commemorations of the centenary of the war. We should look forward to independence and all of the possibilities and potential that brings, but in the exhilaration of now, we should not forget our past.

• Available in various formats at restlessland.com and at Calton Books, 159 London Road, Glasgow