PAY JUSTICE AND PAY EQUALITY: healthcare workers staged a series of rallies after the government’s clapping tuned into slaps in the face over pay rises. Photo: Craig Maclean

· “We’re All In This Together” declares the signage in one famous supermarket.

Far from it! The household name displaying those posters, Marks and Spencer’s, have just announced another tranche of job losses, tossing 7,000 workers onto the growing scrapheap of mass unemployment.

Workers are being made to pay a heavy price for the Coronavirus.
The government and capitalist employers are making us pay with job losses, pay cuts, slashed conditions, intensified exploitation, the massacre of sick benefits and, yes, loss of lives.

Years of failure to invest—and consciously planned poverty pay—contributes to the slaughter of the innocents during this pandemic.

Decades of austerity left the NHS prone to being overrun when Covid-19 (C-19) hit these shores, so both the Tory government and the SNP Scottish government prioritised clearance of bed spaces in our hospitals over securing the safety of elderly patients thrown into residential care homes.

Freedom of Information investigations have revealed at least 1,200 elderly patients in Scotland were transferred from hospital wards into care homes without being tested for C-19. And that is a gross underestimate, because five of Scotland’s health boards, including the two largest, refused to answer.

Workplace infection & death
Worse still, the same investigations revealed many others thrown in amongst the most vulnerable elderly population at the height of a pandemic had been tested positive in the hospital.

As professor Allyson Pollock commented “this was like throwing a lighted match into a tinderbox.”

This austerity-rooted regime helped trigger the care home carnage that accounts for half of all C-19 deaths.

As we repeatedly warned and denounced in recent months, whilst the governments told us to stay at home they also told us to get to work. They were driven by their preoccupation with upholding the profit margins of the profiteering rich.

The Health and Safety Executive this week reported 600 people in Scotland have caught the virus in their place of work, nearly two-thirds of them in care homes.

As the STUC points out, that figure is only the tip of a vastly larger iceberg. Especially given the notoriety of sectors that employ many of the lowest paid for not reporting accidents at work let alone infection with the killer virus.

GMB union members in Centrica have voted by a whopping 95 per cent for strike action, in a 68 per cent turnout.

Healthcare workers have got together and staged a series of marvellous rallies demanding pay justice and pay equality, many of them pushing for a 15 per cent pay rise, after being slapped in the face by the government when they were excluded from the all-too-miserly public sector pay rise—after having put the lives on the line, face-to-face with Covid.

Many other workers are furious at attacks on conditions, including sick pay entitlements, which is particularly outrageous and dangerous when C-19 has hit chicken factories, meat plants, textile factories and other workplaces.

For example, one multi-billioned retail giant has gone from stopping wages to workers with C-19 to slashing company sick benefit entirely after 3 days’ absence per year.

Precisely those workers with underlying health problems, and therefore most vulnerable to the ongoing Coronavirus, are the same people most likely to be disqualified from anything more than £95 Statutory Sick Pay because ill health has forced them off work for periods.

The road being travelled not just by the Tories but also the Scottish government involves mass redundancies as the subsidies to big business dry up, and the massacre of pay and sick pay.

So what’s the alternative to this tsunami of job losses, pay cuts and life-threatening attacks on sick pay?

At the height of the pandemic the STUC and it’s affiliated unions called for an immediate £2-an-hour wage increase for all key workers.

That should not wither on the vine and become just an empty rhetorical flourish.

Turned into serious campaigning and collective action, it could be one part of unified demands for better wages across the board, underpinned by an absolute minimum, legally enforced wage of £12-an-hour for all at 16.

Such improved wages will transform the lives of hundreds of thousands and radically improve workers’ spending power, which in turn would make jobs far more secure in sectors such as retail, hospitality, tourism and entertainment.

Minimum 16-hour week
At the 2019 STUC annual conference, I proposed my union USDAW’s policy motion for abolition of all zero hours contracts and other forms of insecure, casualised labour, to be replaced by a guaranteed minimum 16-hour week for every worker who wants it.

That pioneering policy was passed at the STUC without a single vote against. It now needs to be turned into a major plank of the trade union movement’s alternative to low wages, rampant job insecurity, and the vicious spiral of job losses they both contribute to.

Capitalism is a system which by its very nature puts profit before people; the health of bosses’ wallets before the health and wellbeing of the working class who produce society’s wealth.

Full wages for sick workers
An increasingly critical issue for the massed ranks of the trade union movement to struggle for is sick pay equivalent to 100 per cent average wages, instead of the pathetic £95-a-week Statutory Sick Pay and the rapid obliteration of company sick benefit schemes currently witnessed.

That one measure could have prevented countless C-19 deaths by removing the financial pressure to go to work despite carrying the virus, thereby infecting others.

The Tories have severed the lifeline of the Coronavirus Job Retention Scheme despite the fact the deadly disease is still here and still as lethal.

They’ve thrown the sop of £1,000 grant for every worker not made redundant.

Plenty of big businesses will pocket that publicly funded grant to the benefit of their profit-and-loss accounts.

4-day week on 5 days’ pay
Even the capitalist government of Germany is contemplating a 4-day week, after the giant 2.3 million-strong IG Metall union called for a 30-hour week to save jobs.

Vast areas of human life require work to be done, yet the system we live under means the optimists around the Bank of England predict 2.5 million unemployed by Christmas, whilst the economic pessimists warn of about 4 million, including one in every three young people.

Such waste of talent, energy and skills, and the attendant misery and poverty of mass unemployment, is a searing condemnation of a capitalist economy founded on the profit motive.

School leavers should be guaranteed either an apprenticeship on at least a £12 minimum wage, free further education with a living student grant, or a decent, meaningful, unionised job.

Society is screaming out for adequate numbers of highly trained workers in areas as varied as the NHS; social care; mental health services; education; council services; environmental improvements; house building and retrofitting; vastly expanded public transport; production and distribution of clean green energy and all the equipment that goes with it.

150,000 green jobs
The potential for a vast green jobs plan was illustrated in the recent STUC report showing where 150000 new, green jobs could be created in Scotland.

But instead of fulfilling the verbal flourishes of “Scotland becoming the Saudi Arabia of renewables” as declared in the past by Alex Salmond, the SNP government has utterly failed to challenge the system whereby growth in wind farms and other green energy projects has almost entirely bypassed any job creation in Scotland itself.

Instead, they preside over the obscene absurdity of wind farm construction and decommissioning of North Sea oil and gas installations being carried out abroad, as far afield as cheap labour Bangladesh and Indonesia, while fabrication yards and other facilities a few miles inshore lie idle. For example the BiFab yards in Fife and Lewis.

Rubbing salt into the wounds of a country facing mass unemployment, the new Viking onshore wind farm on Shetland, the biggest of its kind in the UK, is now to be built and operated by the Danish Vestas company.

At least 400 initial construction jobs are therefore in the hands of an overseas profiteer, rather than being part of a Scottish public sector energy corporation which could provide tens of thousands of well-paid jobs and apprenticeships for young people, giving them purpose, dignity and a secure future.

Why should the Scottish Government leave the fate of Scottish workers in the hands of Vestas, the same company which in 2009 declared mass redundancies at its factory in Newport, Isle of Wight, leading to a factory occupation by the workforce, which the Scottish Socialist Party built solidarity for in Scotland as those workers rightly demanded nationalisation to save jobs?

And they were spurned in their demands by the same Labour government of Gordon Brown which previously spoke eloquently of creating 100,000 green jobs.

Based on public ownership of key sectors like construction, public transport, energy, major industrial enterprises and the banking system, Scotland could lead the way by immediately creating at least 150000 new green, well-paid jobs with full collective union rights, and workers’ control over health and safety and other day-to-day decisions.

Imagine what such a planned socialist recovery programme could mean for the construction of 100,000 social sector houses, built to the highest environmental standards, with varieties of stock guaranteeing gardens or other outdoor space for all who want it.

Imagine how household energy bills which have rocketed during the lockdown could be slashed through retrofitting and insulating existing housing stock, and removing the profit margin in a publicly owned energy sector.

Imagine the scale of green re-industrialisation Scotland’s shipyards and factories (including under-threat Dennis buses) could enjoy in the production of vast new fleets of ferries, buses and trains for a vastly expanded and integrated public transport network—free at the point of use, thereby combating poverty, social isolation and pollution.

Imagine how hundreds of thousands of workers could be liberated from the health-threatening drudgery of 12-hour shifts and more, by employment of new staff in areas of greatest need on a maximum 4-day week.

Imagine, and organise
Workers and their unions need to imagine this and much more, but turn these entirely realistic visions of our collective future into reality by fighting for it.

Truly the choice we face is that posed by Rosa Luxemburg a century ago: socialism or barbarism. 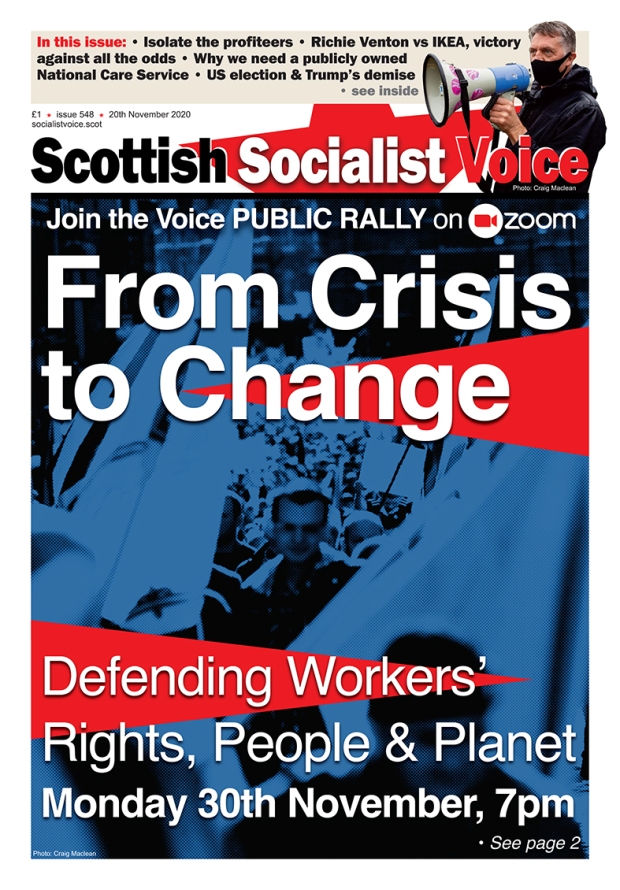