· Amidst the dizzying series of dramatic developments in the Brexit saga, creating a historic crisis in UK politics, it needs to be understood that it is also located in a much wider social, economic and ecological maelstrom.

As this Voice goes to press, the smoke is rising from a large chunk of Saudi oil production works and war tensions between Trump’s US and Iran grow ever more serious, and this against a background of an Israeli election which could see even harder right politics win.

The danger of war supposedly contained by the end of the cold war is now back as a real threat and, as we have reported in previous issues of the Voice, now includes serious discussion by the US military on using limited nuclear war as a policy tool.

This growing danger is played out by the most significant challenge posed to the very existence of humanity on the planet the ever growing Climate Crisis.

From hurricane destruction in the Bahamas through fires, floods and ice melt almost every day brings another dramatic confirmation of the humanity threatening nature of the crisis the sheer enormity of which can paralyse action through fatal acceptance of what it means.

That is why the Voice unreservedly welcomes the actions around the 20th climate strike and the related protests, civil disobedience and mass pressure for change which has unquestionably smashed the complacent wall of silence on the issue and put it at the forefront of public concern.

That this concern is increasingly reflected in the wider trade union movement, most notably by the linking of the jobs fight at BiFab to climate change and the wider discussion at bodies such as the TUC conference and the STUC is doubly welcome.

It is in this context that the Voice forum in June on workers and climate change was held and that our new pamphlet entitled A Climate Emergency: Beyond a Capitalist Solution has been published.

The central conclusion both of the forum and the subsequent pamphlet can be summed up in the concept which sees what is termed an “interest based struggle” as the key to building a movement capable of halting and then reversing climate change.

First and foremost this places the working class majority here and globally at the centre of such a movement and seeks to fashion policies which harness their skills and knowledge within a context that sees the solution to the climate crisis in public ownership, planning and democracy.

Just as Marx posed the role of the working class as the motor of social change, this concept places them at the heart of the no doubt bitter struggles ahead to wrest power from the gigantic vested interests of capitalism and finance currently trashing the planet and strike out in a new direction.

River of protest
From documents such as the Trade Unions Against Climate Change Campaign showing how 1.5 million jobs can be created in this process, through the continuing fight at BiFab to the ongoing work on Just Transition, a basis already exists for this approach.

The crucial need now is for the many streams of protest and concern on this key issue—school strikers, Extinction Rebellion, NGOs, greens, socialists, communities and unions to flow into one river of protest and power for change.

Given that this will inevitably reach point of confrontation with the prevailing economics of growth and markets endorsed by almost all governments this looks like a Herculean task but with just 12 years left only action on such a revolutionary scale can work.

It is in this urgent and sombre context that the fast moving Brexit crisis must be set. The Voice supported Remain in 2016 on the basis that the Leave campaign—despite a smattering of so called ‘Lexit’ left leavers—was overwhelmingly a project of the most unsavoury elements of the Little Englander quasi-racist right.

We predicted that the outcome would be in Connolly’s words a “Festival of Reaction” and the current state of UK politics—dominated by neo-Trumpists—both bears out that prediction and serves as a dire warning of what we are up against.

It goes without saying that the Voice utterly rejects and opposes the politics of Johnson, Farage and Gove and their messages of hate delivered in either the Eton buttered tones of the entitled Tories or the golf club bar stridency of Farage.

However we also firmly reject the idea that where voters stand on Brexit is the only issue that counts.

In a country scarred by austerity, service cuts, low pay, precarious work and a chronic housing shortages socialists must offer a vision of change that impacts positively on the reality of life in today’s Scotland.

This must include a real campaign for independence, not as prop to a kinder version of the free market horrors of today’s Tories but as vehicle for real change, capable of advancing the living standards and lives of the people, while acting to protect the planet.

As we reject the free market fantasies of the Tories we also need to have no illusions on the fact that the spending constraints and business first policies of the EU are also not compatible with socialist change and also should be rejected.

Simply put, at this point, the revolting, smug racism of the Tories over Brexit and the undoubted problems revealed by Yellowhammer heighten revulsion at the hardline attitudes of the union jack-waving Brexiteers presents a real horror to us all.

EU economics
However, while we defend progressive aspects such as free movements and human rights we need to recall that our EU membership has been used against public ownership, took place while the bloc’s economics crushed Greece and has made no difference to the imposition of austerity here for the last decade.

In Scotland, it remains urgent that austerity is rejected and public ownership, secure jobs, council housing and free public transport be put at the heart of a renewed independence campaign. 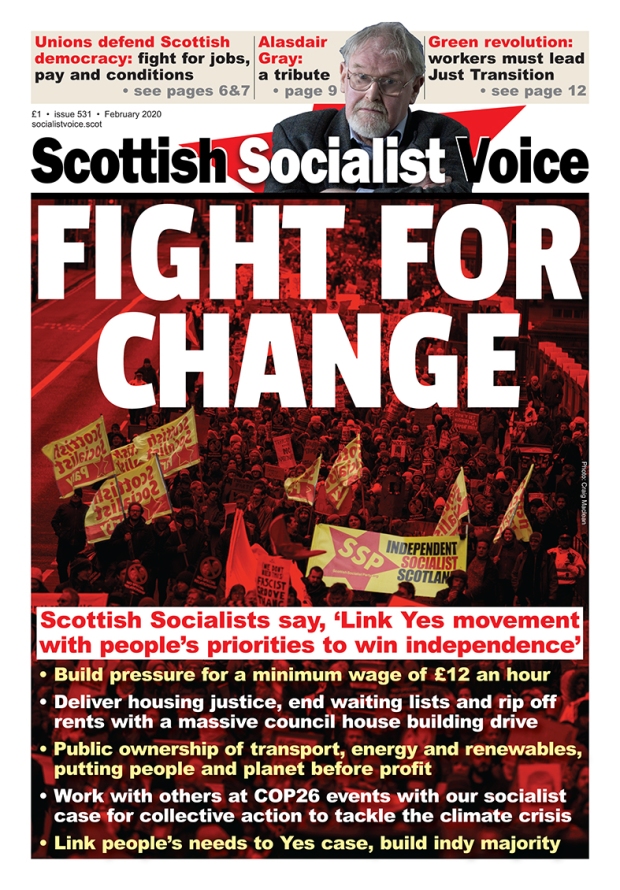