WE REMEMBER: activists gathered to remember the seafarers that went to fight the fascism that Franco inflicted on Spain (Photo: Craig Maclean)

The Glasgow Shipping branch of the RMT union recently hosted a gathering of local, national and international supporters at the unveiling of a plaque and statue on the banks of the Clyde, in memory of the seafarers who ran vessels to break the blockades during the 1936-39 Spanish Civil War. People were there from all over Scotland, the UK, Germany, Spain, Denmark, the International Brigade Memorial Trust, amongst others. Richie Venton spoke to Dan Henderson, chairperson of the RMT Glasgow Shipping branch, asking him why they’d staged this event 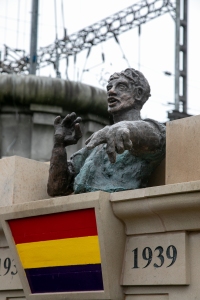 “This is an international memorial to seafarers who left their home ports from all over the world to support and bring supplies to the Spanish people, who were fighting the fascist Franco. People who had nothing.

“We are internationalists first and foremost, and this is a memorial to international seafarers. They ran the blockades throughout the Spanish Civil War of 1936-39.

“In the UK, they especially came from the ports of Cardiff, Liverpool and Glasgow. And the people of Glasgow played their part too. When the working class of the city didn’t have much, what little they could spare they used to help the Spanish people in the plight they faced.

“We hope the memorial erected on the banks of the Clyde will be the catalyst for other memorials in these proud seafaring cities. It took us 15 years to complete, but the proudest thing about it is that it’s there for you, me, our kids and grandkids, there forever.

“Especially now at a time when the world is in social and economic crisis, and so much is blamed on working class people forced to come and live in this country, people we welcome here, but who are being demonised in the exact same way as were those we put up the memorial to.

“We see the rise of the far right and fascism, so we would like this memorial to be a reminder of what happened, and give people a kick up the arse that this is a real threat.

“Even in the last few days, in New Zealand, we’ve seen how easy it is to scapegoat and demonise people, and that turning the other cheek—just as the UK government did towards Franco in the 1930s—enables this to happen. So we hope people will look at this memorial and have a different viewpoint. It’s both a memorial and a warning for future generations. 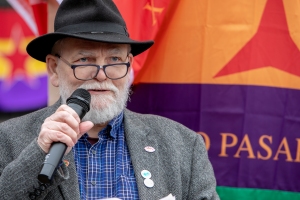 “Frank Casey, the sculptor who designed the plaque and memorial, is an old communist from Glasgow.

“Way back, one Sunday evening, he watched Harry Secombe interview an old sea captain who had sailed the globe several times.

“When asked what his greatest achievement was, he declared it was running the blockades in the Spanish Civil War.

“Frank took this on board, ran with it, and approached the Glasgow Shipping branch of the RMT.

“It took 15 years to complete, with many stressful times, but the day we unveiled this permanent testament to the blockade runners made all the hard work worth it. It makes me incredibly proud to be a member of the RMT, to be a trade unionist.”