by Colin Fox, SSP national co-spokesperson • Jeremy Corbyn was in Scotland last week. He told listeners to Radio Four’s World at One that, “Scottish Socialist Party members should join Labour and help us advance the case for socialism.”

It is not difficult to see why he wants our help. Hundreds of his MPs are preparing to leave and set up a new party. Reports in the Financial Times and elsewhere suggest it is only a matter of time, with next March the likeliest date, coinciding as it does with Britain leaving the EU.

The contempt for Corbyn shown by his opponents reached new depths last weekend when Gordon Brown and David Blunkett were wheeled out of retirement and lined up against him.

Dame Margaret Hodge MP went on ITN to say “Corbyn is the problem here,” in reference to the charge of anti-semitism levelled against him.

Corbyn is no more anti-semitic than the renowned Jewish composer Daniel Barenboim. Both men have criticised successive Israeli governments for their persecution of the Palestinians.

Yet the Labour leader has drawn unparalleled hostility over his insistence that criticising the State of Israel does not make you an anti-semite. But his critics are not having it.

Former Chief Rabbi Lord Sachs plunged the debate to new lows in describing Corbyn as being “as great a danger to British Jews as Enoch Powell was in the 1970s!”

Meanwhile, the SNP is embroiled in a simmering civil war of its own. Alex Salmond and Nicola Sturgeon have apparently not spoken to one another in months.

Relations had reportedly broken down well before the sexual misconduct charges against him emerged last month. It is all a far cry from the heady days of Nicolamania and the mad rush to join the SNP after 2014’s indyref.

The notion that either party offers a challenge to capital on behalf of working class people as claimed by many at the time was of course nonsense. But many were taken in. No one is rushing to get a selfie with Nicola or Jeremy now however.

How the political landscape has changed. Last September, Theresa May’s party was wracked by crisis following a humiliating General Election.

And ‘radicals’ like Owen Jones, Yanis Varoufakis and Paul Mason were keen to bestow middle class ‘Guardian’ angel status on Labour’s “most Left-wing leader.” Momentum—pardon the pun—claimed they had shifted irrevocably in Labour’s favour.

A brave new world was dawning and small parties like the SSP had to recognise the implications of this profound new development or die, they opined.

We declined their offer because we knew from 100 years of history and experience Labour was a dead-end. Corbyn would never become Prime Minister, we argued. His time as leader would be remembered solely for the bloody feud waged within Labour’s ranks.

The MPs who hated him with every fibre of their being were merely biding their time. That endgame was not difficult to see. The headless rush to join both parties will now be matched by a similar mass exodus as the first rounds of cordite fill the political trenches.

Both civil wars are however the result of failed projects. The SNP failed to advance the case for independence nor present a coherent strategy for achieving it.

Nicola Sturgeon’s indyref 2 plan announced in February 2017 was inept. Her decision to tie it to EU membership amid prophesies about Brexit reached levels of idiocy at times.

And the SNP’s long-awaited Sustainable Growth Commission Report delivered a centre-right economic case for independence that could fit neatly inside any Conservative manifesto! All this is behind the Salmond/Sturgeon conflict.

Labour’s row over anti-semitism is another proxy war. The bitter divisions behind it broke out into the open only because they were uncontainable behind closed doors.

Those MPs plotting to launch a new party since February never accepted Corbyn’s leadership. None of them could give a fig about anti-semitism, or what Lord Sachs calls “persecution and discrimination.”

Most were in the Labour government that prosecuted the illegal war in Iraq. They felt no qualms about persecuting 500,000 innocent Iraqis.

They discriminated against public services with corrupt PFI and PPP privatisations and discriminated in favour of their billionaire friends in the City when deregulating the financial services sector before the calamitous days of 2008.

The SSP recognised long ago that the SNP is no place for socialists, and never has been. We drew the same conclusion about the Labour Party.

Socialists determined to challenge the exploitation and barbarity of capitalism and seeking its replacement by a socialist society have no illusions in either. There are, as we warned throughout the past four years, no short cuts to confronting the power of organised capital.

There is no alternative for working class people seeking material advance than to build their own party to challenge the power of international capital. In Scotland, the SSP is and remains that party. 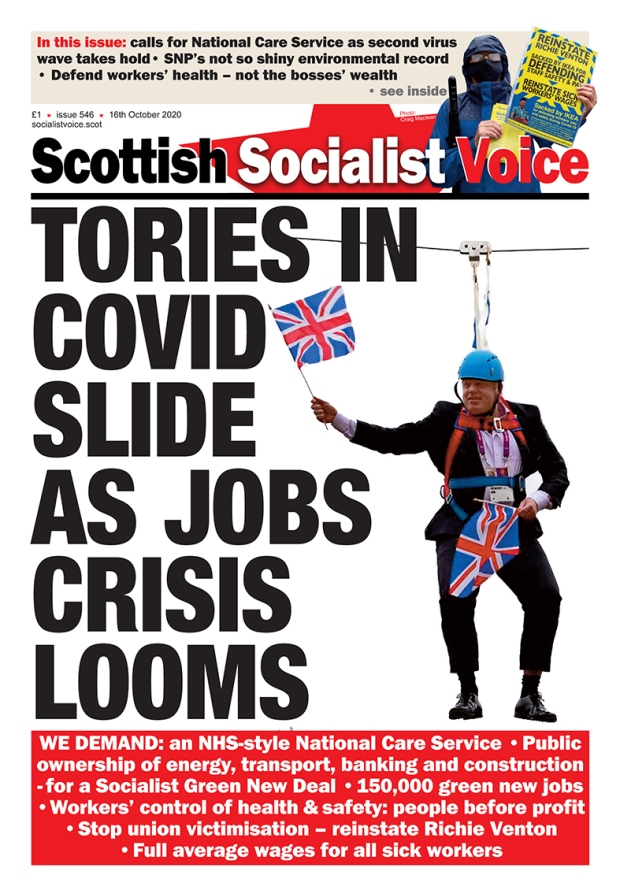