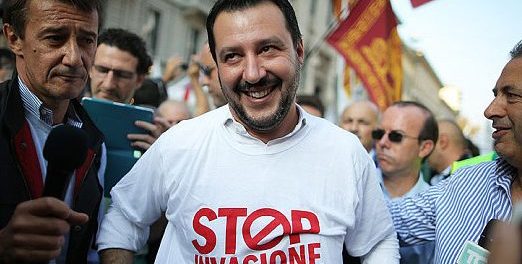 by Ken Ferguson • Temperatures soar to new heights as Glasgow gets hotter than Greece and, as we go to press with this Voice, the heatwave stretches on.

Likewise in the world of politics the mercury heads to boiling point as multiple crisis and uncertainty look likely to mean that this summer will be long and hot.

Most immediately this month sees the long delayed visit by US President Donald Trump to his pliable client state Great Britain and its grovelling Prime Minister Theresa May.

And no doubt in some parallel Brigadoon tartan reality, the odious Trump will make much of his Scottish roots, play golf and shake hands with the powerful as he helicopters into Scotland.

He will also face demonstrations (kept at a safe distance a vast public cost), protests and disgust and the almost infinite vileness of both his views and actions.

No doubt the protests against him will be large, vocal, imaginative and will amply drive home the widespread public disgust at both Trump and the ideas he stands for.

But of themselves, as we discuss elsewhere in the Voice, they will not be enough.

Odious as he is, Trump is far from the only quasi-racist demagogue spreading their message across the globe as a fearful public grapples with the social and economic forces unleashed by decades of neoliberalism.

In country after country—Germany, Austria, Poland, Hungary—far right, essentially racist forces are either challenging for power or in government.

The latest poster-boy for this inhumanity, new Italian populist deputy Prime Minister Matteo Salvini, seized the agenda by barring the rescue ship Aquarius from Italian ports and, in a sinister echo of past European horrors, seeks a census of Roma people, street by street.

Under the Nazi regime, Roma faced persecution and extermination. They, like Jews and gay people, wore a triangle; in their case black in colour.

That this is happening in Italy, a country which saw its own armed partisans play a major part in defeating both Mussolini and Hitler, and once had the biggest Communist Party in the West, harshly spotlights the scale of the problem.

The Voice does not believe the thesis that the working class across the UK, Europe and the US has turned racist but rather that, after decades of failure of mass supposedly workers’ parties from Labour, US Democrats, French socialists and German social democrats, have sought an alternative.

That the alternative is far right populism is an issue we examine elsewhere in the paper but the part played by the left’s failure in it is undeniable.

Here in Scotland, New Labour betrayed the hopes of voters who stood firm against Thatcherism by carrying on with the pro-market essence of her policies while the SNP—as spotlighted by their Growth Commission—also carry on with such an approach.

Yet on every hand the facts of living reality underline not that neoliberalism has failed but that it is working to its purpose enriching the few at the expense of the many.

Rail users face soaring costs, service suspensions, melting rails and yet another public takeover of the East Coast main line, as the much lauded privateers Branson and Soutar flop.

With falling living standards, insecure work, handcuffed trade unions, rip off landlords running riot and a health service in crisis the fuel that feeds discontent lies all around.

In the face of the gathering social and environmental crisis the idea, at the heart of both the Growth Commission and the Westminster elite’s pro-market leave-it-to-the-market politics is woefully inadequate.

As readers know, we support Scottish independence in the form of a modern democratic republic but not for a change of flag but for a complete change of system.

As Westminster endorses the dinosaur technology of further nuclear power and fracking alongside a planet trashing Heathrow expansion the need for an urgent break with a free market UK is ever more urgent. The choice is indeed stark.

Either we move to break the power of the moneyed elite and put the vast social and technological resources to work to build a really just and sustainable Scotland or stay on the same ever accelerating motorway to destruction.

Such a break would see public ownership to sack the profiteers and develop our vast natural resources in green energy re-industrialising Scotland, protecting the environment and creating thousands of skilled jobs.

It would use the collective social and economic resources of a new Scotland to build rented homes, raise wages, end insecure work and start the task of building a society putting people before profit.

In this vision independence is a indispensable tool but not an end in itself.

That is why the broad Yes movement needs to offer a vision which rejects not just the union but the failed pro market ideas it stands for.

Not only will this address the problems of insecurity, falling living standard and issues such as the housing crisis it is a winning programme to consolidate the support of working class Yes voters and convert those unconvinced No voters of 2014.

In other words an indispensable part of the drive to win Yes next time. 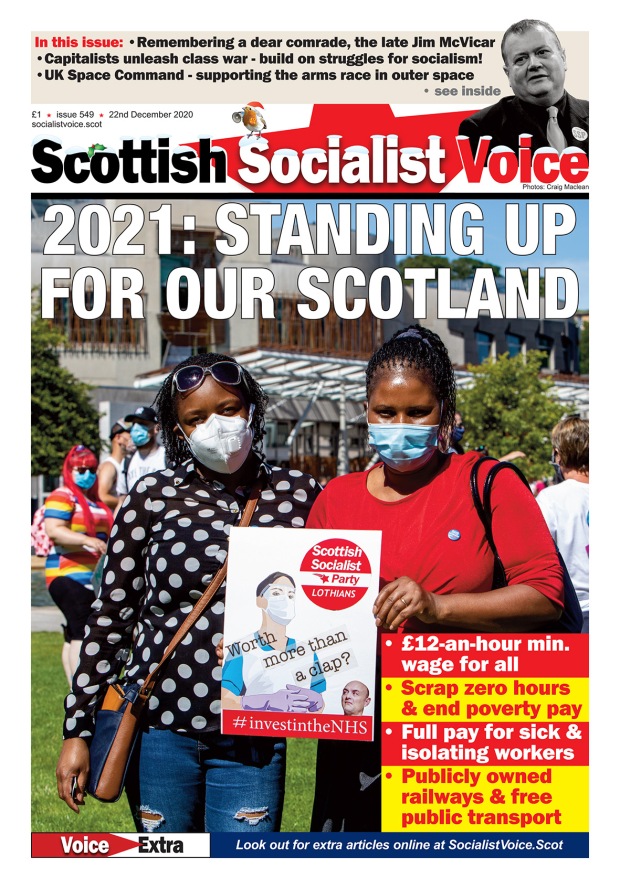