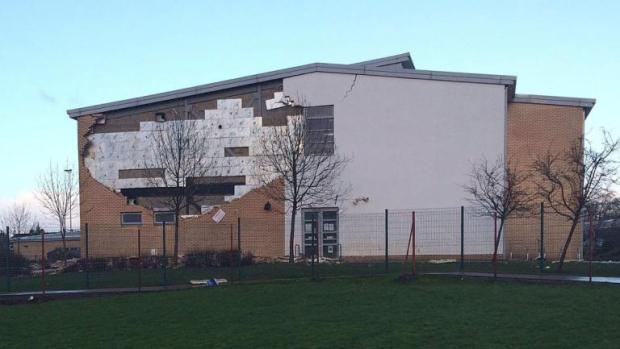 WE SAID NO: the SSP consistently opposed the old Scottish Labour government’s PPP/PFI privatisation schemes both inside and outside of Holyrood

by Colin Fox, lead RISE candidate in the Lothians

• As the Voice went to press, the Scottish Parliament elections were dominated by the closure of 17 of Edinburgh’s schools on safety grounds.

Some 9,000 pupils were excluded from 17 schools built under Labour’s controversial Public Private Partnership (PPP) after officials deemed them too dangerous for occupation.

Built by Miller Construction in the last decade, the schools were closed ‘indefinitely’ by Labour Council leader Andrew Burns on 8 April after ‘serious structural faults’ had been discovered. Edinburgh pupils were due to return to classes after the Easter holidays.

This fiasco which the whole of Britain has been watching with alarm was initially uncovered when a wall fell off Oxgangs Primary school during high winds in February.

Subsequent investigations found the school contained structural flaws which had been putting youngsters at risk for some time. A city wide inspection found 16 other PPP schools built by Miller were also unsafe. It appears Miller had cut corners and ignored building regulations to maximise profits.

News that the Council had closed 17 schools ‘for the foreseeable future’ on safety grounds sent shivers down the spine of Edinburgh parents. Each would inevitably have recalled the death of 14 year old Keane Wallis-Bennet at Liberton High School in 2014 killed when a dilapidated wall in the girls changing room of the gymnasium fell on top of her. Two other serious accidents had occurred at the same school earlier that year with pupils badly injured.

Liberton is not a PPP school and this brings us to the crux of the political differences here. Clearly school buildings have often needed repairs and will again in the future. However as PPP schools do not belong to the Council—they are privately owned and managed—the education authorities depend on ‘outside agencies’ to provide the basic infrastructure necessary to teach the pupils.

PPP schools are run by arms-length limited companies, in this case the ‘Edinburgh Schools Partnership’ (ESP), which is not subject to the same level of accountability or scrutiny as publicly owned schools.

Socialists in Edinburgh have long campaigned against using Private Finance Initiative (PFI) because these schemes represent the privatisation of public services. Edinburgh has one of the poorest records in Britain for using PFI because the Labour Party here was so ‘gung-ho’ in favour of them. Indeed I recall lobbying local Labour MP Alistair Darling at his surgery in 2002 to complain about his support for a Private Finance Initiative to build Edinburgh’s new Royal Infirmary.

The plan meant the hospital was owned and run by a private consortium led by the Royal Bank of Scotland. And I vividly remember him telling me and the two Unison shop stewards who accompanied me that he did not care who owned the new hospital nor was he bothered that all the non-clinical staff would not be NHS employees.

The SSP are not the only people to condemn PFI’s. Professor Allyson Pollock of Edinburgh University was perhaps the schemes most vocal and sternest UK critic. The Royal Institute of Architects in Scotland are no less hostile. Outraged at the cost to the public purse they have described PFI schemes as ‘a dripping roast’ for contractors such are the exorbitant and prolonged profits reaped by them over the lifetime of the contracts.

Professor Alan Dunlop of Robert Gordon University in Aberdeen, another long term critic of the schemes, has suggested the Edinburgh schools may even have to be demolished and rebuilt, such is the nature of the structural flaws.

And Edinburgh architect Malcolm Fraser told Radio Scotland it was an open secret in the building industry that these were shoddy schools built at a ruinously expensive cost to a council too keen to proceed because they thought the figures could be kept off the balance sheet as the assets were privately owned. More than £3.5billion worth of these building contracts were awarded by the Labour Party in Scotland between 1997 and 2010.

PFI is Labour’s shame. These schemes represent the privatisation of public assets. They deliver extraordinarily bad value for money for the public purse. The new Royal Infirmary for instance would have cost Scottish taxpayers £280million to build using conventional public procurement methods but will cost us £1.24billion under PFI!

Unfortunately both Labour and the SNP have used them to privatise public services. The SNP employed their own version, the Scottish Futures Trust, to build Edinburgh’s new Sick Kids hospital, which raises precisely the same political judgement issues for them. RISE has insisted these repairs are carried out in full and immediately to ensure our children’s education is fully restored.

We have also demanded these discredited contracts are rescinded forthwith as the provider ESP has signally failed to deliver the service it was legally bound to provide.

These 17 schools should then be returned to the public sector to ensure parents and pupils enjoy the same level of accountability and local democracy as all other city schools.