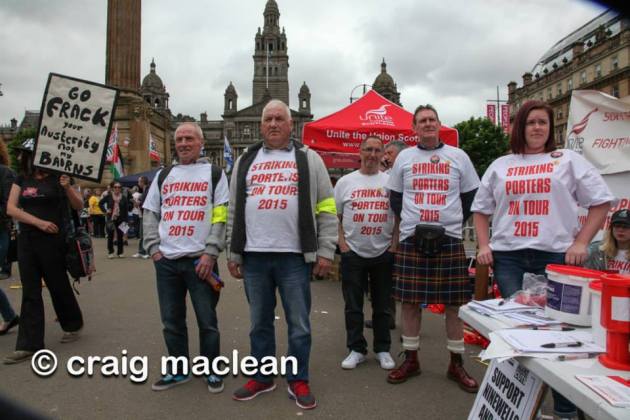 PARTY OF THE WORKERS? the SNP stood by and watched 117 porters at Ninewells and Royal Victoria Hospitals launch strike action earlier this year, demanding compensation after being underpaid for over a decade (Photo: Craig Maclean)

by Ken Ferguson The long Teflon-coated SNP administration in Holyrood is facing growing turbulence as it struggles to square its public image as a left wing anti-austerity government with the reality of a growing list of pro-business policy calls. Leading the field (as we discuss elsewhere in this Voice) is the deeply unpopular issue of fracking where opposition—as witnessed by the recent Forth Bridge protest—is mushrooming.

There can be no doubt that it was this opposition that forced the Holyrood government to extend its moratorium on fracking supposedly to await more research.

Of course in reality, despite the jubilation in some quarters, this is a very limited victory owing much more to the needs of party and policy management than principled opposition to this dangerous technology.

The announcement drew the teeth from any possible opposition at the party’s Aberdeen conference. It also placated Energy Secretary Fergus Ewing who has reportedly considered resignation if it is banned. The scale of vested interests backing fracking is formidable and centres on the increasingly powerful union busting INEOS boss Jim Ratcliffe.

Fresh from humiliating the Grangemouth workforce and their union UNITE he has now bought twelve North Sea gas fields from a Russian oligarch and when, soon, the SNP need to choose between the public opposition to fracking or INEOS profits much will be revealed about their priorities.

This reality was starkly spotlighted when, within 24 hours of the moratorium announcement, INEOS were given the nod to carry out “test” drilling to pave the way for fracking.

Nor are the omens any brighter on privatisation where both on CalMac ferries and Scottish Water the SNP have pled that the EU forces them to put them out to tender beyond the public sector.

It took determined strike action by ferry crew members of the RMT to force a deal which protects their wages and conditions and quite possibly makes the operation unattractive to the private sector sharks circling the ferries.

But it was the decision to award polluting privateer Anglia Water the £350million contract to supply the NHS, Scottish Parliament, prisons, councils and schools that flushed out the truth about the SNP’s “the EU made us do it” defence of the decision.

In a scathing report produced by RISE, Scotland’s Left Alliance, the anti-union and polluting record of Anglia is laid bare. But the dynamite at the heart of the RISE document is the revelation that the claim that the contract had to go to tender is untrue.

RISE sought advice from Dr Marco Goldoni of Glasgow University who is an expert on EU law and in the report he gives a detailed explanation of why the Scottish Government did not have to put the contract out tender because of EU law.

Despite the fact that it has been widely reported, the report’s conclusions have gone unchallenged by the Scottish Government.

The truth is that the “EU made me” excuse is simply a fig leaf and raises disturbing questions about the reality behind the rhetoric of support for public services and coming as it does hard on the heels of the award of the ScotRail franchise to Dutch state firm Abellio, a range of council cuts and the CalMac tender makes the public service support look skin deep.

There is a battle going on for the direction of the SNP government which frankly gives the lie to the carefully crafted image of the party as a natural home for socialists. At best the jury is out on how the tension between the interests of powerful profiteers such as INEOS and those of people and planet are to be resolved.

So far, the evidence is not encouraging and the concessions to the powerful make a strong case for other voices to be in Holyrood to both challenge the powerful and hold the SNP to account.

It is in this context that the need for pro-independence MSPs from parties other than the SNP in the next Holyrood parliament is a vital priority and essential to the pursuit of both the immediate demand for a second referendum and the ongoing battles on wages, benefits and other social demands.

Given that the Greens intend to put the referendum to an EU style “citizens’ initiative” consultation and could, if this say no oppose a second indyref then for pro-independence progressive opinion it is increasingly clear that a second vote for RISE, Scotland’s Left Alliance, is the realistic choice.