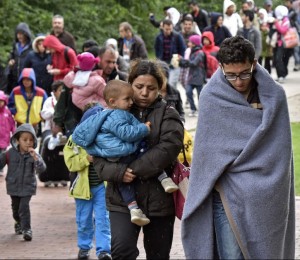 CLIMATE CHANGE: evidence of its human cost is there for all to see

by Jack Ferguson In 2015, Europe has begun to get a small foretaste of the human costs of climate change. There are many complex reasons why there are thousands of desperate people trying to make the potentially deadly crossing from the Middle East to Europe, but if we ignore the role of the global ecological crisis, then we will not be prepared for the future that the news this year is pointing to.

Many of the Syrian refugees seeking a new home in Europe were initially displaced within their own country. Immediately preceding the outbreak of the current conflict in 2011, the Middle East experienced its worst drought in modern history.

Farming communities were devastated, and livestock herds were wiped out. Up to 1.5 million people were forced to move to cities, in a country that has experienced rapid population growth in recent decades.

According to Professor Richard Seagar of Columbia University, who co-authored a report into the role of climate change in sparking the Syrian conflict:

“Added to all the other stressors, climate change helped kick things over the threshold into open conflict. I think this is scary and it’s only just beginning. It’s going to continue through the current century as part of the general drying of the Eastern Mediterranean—I don’t see how things are going to survive there.”

It’s not that climate change is the only cause of the social catastrophe unfolding in Syria—but the interaction of freak climate events with other social and ecological factors points to a future in which changes to the environment we inhabit will push societies across the planet into crisis.

The drought in Syria was exacerbated by a dictatorial state completely unequipped to cope with problems on such a scale, export led farming of cotton and other water-thirsty cash crops which means the depletion of groundwater resources, and a long history of sectarian and inter-ethnic tension, long fostered by outside powers and the Syrian regime itself. A combination of factors that can also be found throughout many parts of the world.

After decades of talking about climate change as a future threat, the clear evidence of its human cost is now available for all to see if they look, and societies in the more fortunate regions of the globe will need to plan accordingly.

The fact is that desertification and intense heat is a threat not only to large-scale inhabitation of the Middle East. Much more than 2º of warming above pre-industrial levels (bearing in mind 1º has already taken place) is enough to see the Sahara extend through Spain and into Southern France, and the Mediterranean would be hot enough to produce tropical cyclones.

This means that it’s likely we may live to see refugees not from Syria or Iraq, but Italy, Spain France and Greece clamouring to be allowed to migrate northwards.

Indeed, even within the British Isles, there are thousands of homes and communities built on low lying land that is threatened by rising sea levels.

The world’s leading climatologist James Hansen recently released a paper arguing that the risks of rising sea levels have been systematically understated, and that we can expect to see 10 metres of increase in the next 50 years. Enough to wipe out coastal cities throughout the world that are home to billions of people.

Unfortunately, tackling climate change has proved virtually impossible for a global society that is predicated on endless economic expansion, itself impossible without a constant supply of cheap fossil energy.

As emissions have continued to rise, it has become clear that any efforts to curb them now are about preventing the worst excesses of disaster, and it will be necessary to accept that some areas of the world currently heavily populated may have to be evacuated on a large scale.

It is easy to envision a future in which the remaining habitable (mostly northern) portions of the world build ever bigger walls for a the rich section of humanity to survive while the majority are left to die.

Such an outcome is unacceptable on a human level, and would represent the most profound injustice, as the countries that are most affected by climate impacts are also generally those with the least historic emissions.

It is a matter of facing the consequences for our actions that rich societies must help those fleeing the places they have trashed for their own consumption.

Scotland has a particular responsibility in this context. We are likely to live in a place that (relatively) will remain more habitable in a world utterly changed by climate change.

Beset by freak storms and at risk of a failing Gulf Stream, Scotland nevertheless has less to fear from rising sea levels. The land that constitutes the country is still bouncing back upwards from the tremendous weight of the glaciers that pushed it down into the mantle during the ice age, meaning that we may have the potential to act as something of a refuge.

In a country where the land was previously cleared and places that were once home to communities have been left deserted. This year’s upsurge of pro-refugee activism is itself a more hopeful portent for the future, of what kind of action will be necessary on a mass scale to make that dream a reality.