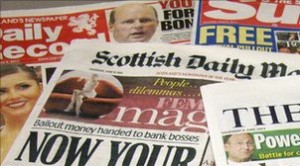 While the business of publishing newspapers is still a profitable pastime there is no denying it is at a crossroads and depending on certain decisions it can stem the current downward spiral or plummet into terminal decline. It’s not breaking news, the pool of newspaper buyers has evaporated steadily for decades. In the years between 1961-73 total circulation of national and popular newspapers declined from between 7.6 per cent and 10.9 per cent respectively.

By 1973 it was estimated that 1.75 million newspapers were bought in Scotland every day. Available figures show the Scottish Daily Express sold a massive 571,000 a day, surpassed only by the Daily Record, with sales of 589,000 every day.

At the same time the Dundee Courier had sales of 126,000 and Aberdeen Press and Journal 104,000, while east and west coast city rivals The Scotsman and The Herald sold more than 80,000 each.

There has been some notable attempts to grow or salvage elements of the industry from the mid ’70s with varying degrees of success.

When the Scottish Daily Express decided to close its doors with the loss of around 1800 jobs a workers co-operative set up The Scottish Daily News which initially sold over 300,000 a day in the first week.

The history of this exciting, if inexorably doomed venture, is a must read. Books by Ron Mackay and Brian Barr and another by the Convenor Alistair Mackie are fascinating tales of ambition, madness and bravery as the workers struggled against the wiles and ruthlessness of media barons Maxwell and Beaverbrook.

More recent experiments in creating new titles have so far met with some success. In 1999 Scottish Media Group worked with the NUJ in setting up a “lower cost” Sunday Herald with a target sales figure of 50,000 which it met and sustained.

Now owned by Newsquest (a subsidiary of US media giant Gannett) it has since seen its circulation boosted dramatically when it stood alone in the mainstream media in supporting a Yes vote during the Scottish independence campaign.

Newsquest also worked with the NUJ with encouragement from the SNP government in creating The National. This was at a time when more job cuts were planned and industrial action was in the offing, but the argument to grow the company portfolio instead won the day and a new daily, independence supporting, title was launched.

However those of us working in the media live in interesting if not dangerous times and the continuing fall in circulations and advertising revenues in particular, continue to lead to demands for contraction instead of growth.

Since October 2014 NUJ officials and reps have been battling to save jobs across the industry. Newsquest have returned three times during that nine month period for savings and cuts; Media Scotland (Daily Record/S&UN) with two lots of redundancies, with some senior editorial staff having left the company recently.

What’s left of the Scottish Daily Express/Daily Star at the start of the year also faced severe cuts, with many staff struggling to see how they can continue to produce their Scottish editions with the skeleton workforce that remains.

News International have cut jobs at The Sun and Johnston Press are restructuring downwards, with more redundancies expected as The Scotsman titles struggle to meet budget targets.

Many people ask why the decline is so fast and steep and there many answers. The change in advertising patterns with papers competing with the broadcast media and of course many companies, local government and charities running their own web sites.

The switch by the public to reading their news online instead of on newsprint is another. The growth of digital media is at least one of the brighter lights at the end of the tunnel although some people see it as the train coming leading to a faster demise. Although the current increasing online revenues are being held up as a good sign, they do not compare with what has been lost in newsprint advertising in recent years.

Companies like Johnston Press were returning massive profits in the region of 50 per cent-plus in some years. No mean feat when you consider the oil industry figures at their height came nowhere near that level. However poor investment decisions have drastically set the company back.

The NUJ is working hard to protect jobs and the industry which we believe is essential to local democracy and accountability, but change is needed. Change that brings restored trust between the press/media and public and helps reverse falling circulations. Some titles have already shown how to do that, while others have failed to learn from ongoing mistakes.

The union’s development of a Modern Apprenticeship in Digital Journalism will go some way to help boost online growth in all online media, not just MSM but also in community media hubs around the country.

Sensible engagement with the union in restructuring and growing online news is something that is working but companies have to be a bit braver and patient, not jumping into make cuts without putting alternatives in place. The survival of a healthy media is important to jobs but also democracy and education and the Scottish people must continue to demand the highest standards of journalism at all levels.