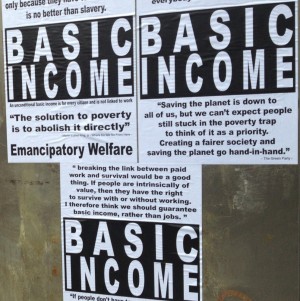 IN THE FUTURE THERE WILL BE ROBOTS: technology is on the verge of threatening skilled jobs everywhere

by Jack Ferguson To many people in places as diverse as Switzerland, Finland, the Dutch city of Utrecht and the Canadian province of Alberta, a Universal Basic Income (UBI) is an idea whose time has come. UBI, or Citizen’s Income, is the radical idea that everyone should have the right to the basics they need to survive, whether or not they are in paid employment. In contrast to the patchwork of (ever diminishing) benefits payments that are given to certain groups today, it would award everyone a guaranteed payment to meet their needs, with any other income earned coming on top of this baseline. It seems like an impossible dream, and yet it has in fact been implemented successfully several times.

Now, with the launch of RISE and the most significant realignment of the left in a generation taking place in Scotland, it’s time to put the plan firmly on the Scottish agenda. Probably the most well known experiment with UBI took place in the ’70s in the Canadian town of Dauphin, where families were given a regular minimum cash payment. The results show that people reduced their work slightly, though most still wanted to be economically active.

The people who cut back on work the most were new parents spending time with their babies, and teenagers focusing on school and no longer required to be assistant breadwinners. Individual tales of people whose lives were changed abound, such as a woman who was able to quit working as a waitress and is now a successful professional artist. Then there’s the fact that hospital visits dropped dramatically, as did mental health problems, work related injuries, car accidents and even domestic abuse.

Now the Dutch city of Utrecht has announced it is to undertake a similar experiment, although this will be limited to current recipients of welfare as a pilot. In Finland, there is a growing political consensus behind UBI, which is supported by both the right and now the left.

This follows the decision of Social Democrats and trade unionists to drop opposition, believing that UBI is the right way to respond to changes in employment, and that the labour movement must be part of the fight to implement the plan in a progressive way. Mayors of the Canadian cities of Calgary and Edmonton are also hoping to push a pilot through Alberta province.

Since the Great Financial Crisis began in 2008, both the left and the unions in the UK have had the limited response that the government should spend money, and employ more people to do socially necessary work. This is similar to the New Deal works programme in the 1930s US, and is known as Keynesianism which advocates “priming the pump” like this to save capitalism.

The problem today is that technology is on the verge of threatening skilled jobs everywhere. Very soon, workers in the wealthy world face not being undercut by their Chinese counterparts, but by robots.

The advances in self-driving cars should give many in the US pause, where over half the states list “truck driver” as the most common job. But artificial intelligence is now advancing to a point that it threatens even skilled managerial and intellectual jobs. So while a massive programme of public works is clearly needed, it won’t be enough to keep everyone in society out of the food bank.

But what if this was not a threat, but an opportunity? What if we saw the growth of machines as a chance to liberate humans from the necessity of drudgery? With a basic income, as the residents of Dauphin found, everyone gets a little part of the luck extended to the children of the privileged – the chance to take time off work, focus on your family, yourself and your community, develop new skills, become politically active or an artist.

The liberated potential of all the people chained behind desks and fast food counters doing what David Graeber has memorably called “bullshit jobs” is thrilling. It would also be radically better for the environment if people were only able to undertake work that was actually needed, and wouldn’t work in dangerous, destructive industries negating the conflict between environmentalists and the unemployed.

Politically, the time is right to fight for this in Scotland, and for UBI to form the centrepiece of RISE’s welfare policy. Welfare “reform”, despite the mass misery, premature deaths, and suicides it has trailed in its wake, is tragically one of the Tories more popular policies with much of the public.

We have been dragged back to Victorian debates about the deserving and undeserving poor. Rather than agreeing to fight on Tory terms about which groups are most needy, we should flip the whole argument, and demand that everybody deserve the essentials of life.

Meanwhile, UBI has for decades been the flagship policy of the Greens. In my view, the left unity achieved by RISE is an essential first step towards major social progress in Scotland. When we look to the longer term past this coming election however, I would argue that left-green unity is the essential next step.

Both sides are anti-capitalist, even if they differ on details, and both recognise the existential threat that our current economic model poses to human survival. Unity would mean hard work and compromise. As a concrete first step, I propose that RISE left greens come up with a detailed joint-proposal demanding the full devolution of welfare powers, in order to implement a high basic income.

Joint campaigning for a worthwhile goal would present opportunities to build relationships and trust towards greater future co-operation, an approach which is already bearing fruit for socialists.