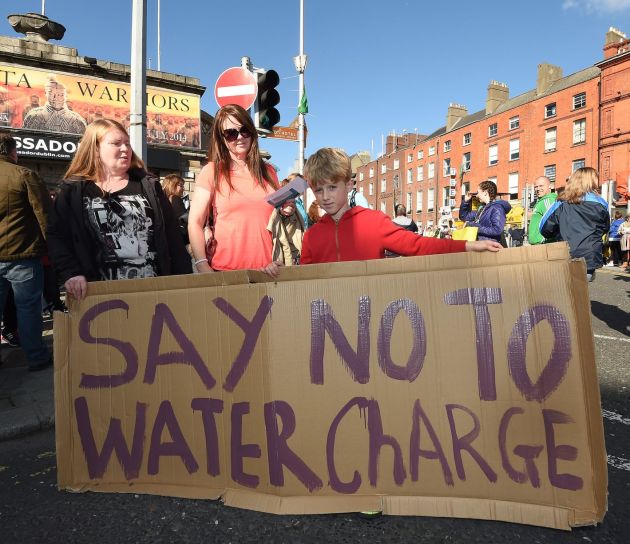 by Francis McCafferty A widespread boycott of water charges is underway in Ireland with official figures revealing that less than half of households have paid controversial new charges introduced earlier this year. Only 675,000 households paid the first quarterly charge out of a total of up to 1.8 million. The payment figures had been continuously delayed by Irish Water, the new body set up to administer the water service and introduce the charges, precisely because it was confirmation of what many had expected after a tumultuous year of protests.

In October last year, 100,000 marched in Dublin, followed in November by an estimated 250,000 which took part in local marches the length and breadth of the country and in December up to 120,000 again brought Dublin to a standstill.

The scale of the protests and the potential scale of non-payment forced the government to cut the rate of the charges and push back the billing date by three months. The backlash has been such that it is now impossible to find a public figure openly supporting the privatisation of the water supply.

Protests have continued on a smaller, more local basis with demonstrations of several thousands in places like Cork, Limerick, Galway and Letterkenny.

The programme of water meter installations has been severely hampered by local protests in housing estates, with a strong Garda presence being required in many areas to force the installations to proceed.

The hope of the government was that the energy of the protests would dissipate given time and that the concessions they had offered would be enough to win ‘middle Ireland’ away from the protesters.

Increasingly vitriolic attacks on ‘extremists’, coupled with a number of arrests of leading activists were designed to split the anti-water charges movement by identifying and demonising a ‘hard-line’ element in the public mind, in particular those who are actively calling for a boycott of the charges, but the non-payment figures have shown that the government are losing hands down.

To many outside Ireland, it is slightly bewildering that having taken so many years of austerity without protest, the Irish people are now in open revolt against charges which are the norm in practically every other developed country.

But the revolt on the charges is a reaction to the seven years of austerity imposed first by the Fianna Fail government and then by the Fine Gael/Labour coalition government.

In particular there was widespread, simmering resentment that the government had succeeded in forcing through a new Property Tax in the teeth of a similar revolt in the previous years.

Initially called the Household Charge and collected by local authorities, it had been the subject of another huge boycott, despite the threat of fines of up to €3,000 for non-registration.

It was quickly replaced by the Local Property Tax which was administered centrally by the Revenue. The fear of Revenue with the power to make direct deductions was pervasive and people paid up through gritted teeth. The boycott collapsed.

There is also widespread resentment that the Water Charges and Property Tax were imposed as part of the bailout deal with the ‘Troika’—the European Central Bank, IMF and European Commission—following the collapse of the banking system, with the Irish people saddled with a debt of €65 billion.

Not a single extra job or service has been provided by the Property Tax. While 40 per cent of our water supply is wasted in leaks in the system (a figure the government accepts as accurate), all the effort and investment instead goes into meter installation to ‘monetise’ our water supply.

That is why the anti-water charges movement characterises the new charges as ‘bailout taxes’. When the government says we must pay for services, there is a widespread understanding that we do already pay through central taxation, that we will not pay twice.

It is widely expected that there will be a general election later this year. While support for Fine Gael, the conservative major coalition party, is holding up, Labour stands to take a hammering, having opposed the austerity programme of the previous Fianna Fail government and having specifically opposed water charges.

Tánaiste (Deputy Prime Minister) Joan Burton, the leader of the Labour Party, has become a hate-figure because of her staunch defence of austerity measures and the venom with which she has attacked the protests, at one point complaining about protesters ‘expensive’ camera phones.

Opinion polls suggest that the days of alternating governments dominated by the two conservative parties, Fianna Fail and Fine Gael, are gone with Independents and small parties, taking up to 27 per cent. Most, but by no means all of these, lean to the left.

Sinn Fein will also do well but are under increasing pressure from the growth of the left, having lost the Dublin South West by-election late last year to the Anti-Austerity Alliance after leading party figures announced they would be paying their water charges. They have since reversed that position but still avoid explicit support for the boycott.

The most important political change is that hundreds of thousands of Irish people have got involved in protests for the first time in their lives and have been led to question the system that insists that faceless bondholders be paid back every single cent of their bad bets while even those who have lost their jobs in the crisis have to fund them through new charges and taxes.

By maintaining the boycott we will ensure that whatever complexion the next government takes, they will have only one option when it comes to water charges and that is to abolish them.

• Francis is a member of Can’t Pay Won’t Pay, an independent campaign in Donegal/North Leitrim