The Scottish Socialist Party is standing in four seats for the 7 May 2015 General Election. Here are our candidates’ latest updates:

Only days until the election and Renfrewshire activists supported by members from other branches continue with a level of activism that other parties might envy. We continue to have regular stalls and leafleting and canvassing in the local community. We have had two public meetings under our belt which we have used to talk to folk living in the local community emphasising that our candidate Sandra is a true neighbour. People know who we are because of our community activism and regular stalls we hold throughout the year. We are going through an unprecedented election.

When we decided to stand it was assumed this was a safe Labour seat but many polls indicate that the SNP may take this seat. Very surprising when Douglas Alexander’s majority was 16,000 at the last election. We never underestimate the party machinery of the bigger parties though and acknowledge our financial resources are less than the rental of the SNP’s and Labour’s rent of their hubs. Our main expense has been a leaflet which has been delivered to the GPO for delivery. One positive of this being such a too close to call seat is the amount of press we have received. Sandra has regular columns in both local papers which cover the local constituency. She has also been interviewed by national press and will be on the radio soon. We will continue to use these links after the election for the benefit of the local and national party. We hope to increase our vote but expect to be squeezed as people vote tactically. This will not stop us though getting the message out there and using this election as a pathway to future elections. We have learned so much and will put this knowledge to good use. People know we are here to stay not just for the duration of the election.

Another busy period here for us in Glasgow East SSP in the run-up to the election. We’ve had another successful public meeting in the area, this time in Tollcross Community Centre and have managed to recruit another two new members to the party locally, following on from our earlier successful event and four new comrades in Easterhouse. Postal votes are beginning to arrive in the constituency and we remain ever hopeful of receiving a respectful voting figure the party can be proud of. We’ve always had our first local hustings event last week were our unique socialist message highlighting the £10-an-hour living minimum wage went down a bomb with a fiery and passionate as ever East End audience and we look forward to the second hustings this coming Thursday in Easterhouse. Our royal mail leaflet has been printed and is being handed in later this week with 40,000 lucky east-enders getting to view the SSP’s distinctive and unashamedly class based message. We will continue to hold regular street stalls at Parkhead Forge and Easterhouse Shopping Centre and are relishing the chance to carry the torch for socialism in Glasgow East into May 7th, proudly standing up for Scotland’s working class majority and for a locally based workers MP on a workers wage.

The SSP campaign is only growing more intense in Edinburgh South as the General Election approaches. Since the last report, the Edinburgh South SSP campaign has produced and prepared 45,000 quality election leaflets to be delivered by the Royal Mail and further delivered door to door another batch of nearly 5000 leaflets for our next public meeting, “£10 Now! Come and hear the case for the £10 Living Wage!” featuring our Edinburgh South candidate Colin Fox. With more of our posters for this campaign, and for the meeting starting to appear about the constituency, we’ve been keeping our visibility and profile high in the area. Every home in the Inch area of Edinburgh South will soon have received at least three leaflets, had its door chapped by a canvassing team at least once, and been invited to a public meeting. In the Marchmont area, by the end of the campaign every home will also have received at least three leaflets, been invited to a public meeting, and in this instance, if the weather permits, there is still the scope and resources for at the least a sizeable portion of the area being canvassed by the end of the campaign. Across the rest of the constituency the story is the same. SSP leaflets and canvassers are increasingly common sights at the door! There is still the need for that final push before the election though. That last chance before the 7 May to send a powerful message around the constituency to say that our communities will not sit idly by and accept the brutal austerity without a fight. To say that it’s time we gave ourselves a voice by voting for the Scottish Socialist Party on 7 May, and that going forwards beyond then, the SSP will always be prepared to stand up with and for the hard-pressed people of Edinburgh South. 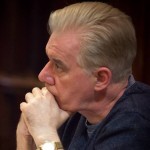 Days to go and the Scottish Socialist Party’s campaign in Glasgow South West is in full swing. Tens of thousands of leaflets have been distributed, hundreds of people canvassed, lots of public stalls organised, two public meetings staged and a lively debate held by Sunny Govan Community Radio. The campaign has already achieved its primary objective which was to continue to build the Scottish Socialist Party in the constituency. The party profile has greatly increased over the past few weeks with significant numbers of relatively new, younger members being involved. It has also allowed the party to campaign on key issues like the £10-per-hour minimum wage and the ending of Zero Hours Contracts. In fact, on the stalls and at meetings it is this latter issue which is raised most often. Whatever the eventual vote the campaign has proved a worthwhile exercise in getting the party out there and promoting the case for socialism and independence. The experience will stand us in good stead for the Scottish Parliament election next year.