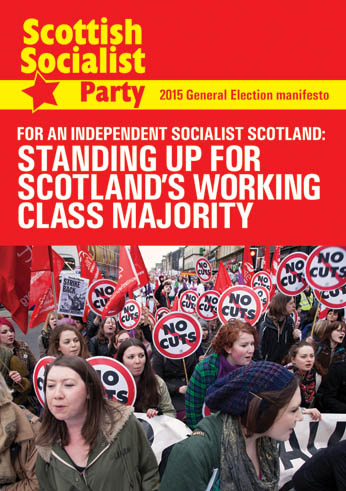 by Sandra Webster, SSP national co-spokesperson We should be proud of our manifesto which is a blueprint for our policies. Policies which present our vision of independence and a statement of intent that for us independence is only the beginning. It truly is a people’s manifesto which puts the interests of humans before big business. Investing in people rather than in global corporations will create a more equal society. Trickle down economics have been proven not to work in this government’s five years in office. The rich are getting richer or at best holding on to their capital. 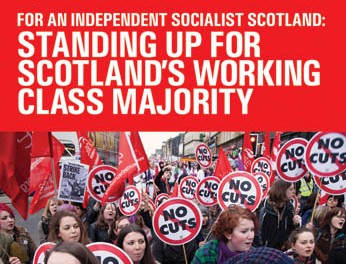 Social “entrepreneurs” increase their wealth from the misfortune of others’ lives. We as socialists have the opportunity to share another narrative.

Greed isn’t good, despite the Thatcherite mantra. Caring for others and a more equal distribution of wealth will create a more compassionate society.

That is why I am proud that our manifesto is not ashamed to put people before profit. No other party has said they will protect the most vulnerable.

While other parties pledge to continue austerity and only reach out to “hard working families” we recognise that whatever unit you live in, you want the best for those you care for. Our policy of ‘£10-an-hour now’ will take thousands out of poverty not in some distant utopian state like a carrot dangling before us but immediately.

We will also reach out to carers, ensuring they have the same opportunities. This will transform the lives of people with disabilities and those who care for them. Despite listening to carers and the promise of the Smith Commission in devolving disability benefits to Scotland, the best the SNP could come up with is increasing Carer’s Allowance in line with Jobseeker’s Allowance.

The SSP is also the only party that is critical of existing Self Directed Support which has created a postcode lottery throughout Scotland.

Individuals face real hardship, having to pay the “care tax” which means a certain amount being taken off care benefits at source before an individual receives a personal budget. This has led to increased poverty among people with disabilities.

We also acknowledge that the current welfare system is unfair and unfit for purpose. Civil servants are expected to stick to targets to enforce benefit sanctions rather than their role as advisers. A friend with a sick child was sanctioned recently as she could not attend her weekly interview because her child was ill.

This led to her family being affected and having to rely on a food bank. Sanctions don’t only affect the individual but punish the whole family. Other reasons for sanctioning include not applying for 60 jobs a day, or being late. We will put an end to this regime and allow staff to support people to find work.

At the moment, Housing Benefit is nothing more than rich landlord’s subsidy going into the pockets of those who least need it. Housing Benefit paid into the public sector will support an ongoing programme of building more social housing.

These are a few highlights of the manifesto. A people’s manifesto for what I hope will be a people’s election. It was written not by political mandarins but by people with experience in life. We are not poverty-tourists but a party who will always put people before profit.

As a candidate in the General Election, I see it as ammunition and the chance to show we are different from the other parties. During the indyref, we moved politics to the left, and this process will continue during this election and those that follow. I’m proud of this manifesto and of being able to stand with you, comrades.