DAWN OF THE ED: working class Scotland is under the yoke of insecure, poorly-paid work, thanks to Labour, Lib Dems and Tories

by Ken Ferguson, editor, Scottish Socialist Voice The British state and its political class have a centuries-old, well deserved reputation for lying and duplicity which earned them the label Perfidious Albion across the globe. The two-year referendum campaign with its scares, smears, prediction of doom and outright lies dished up by the politicians of the cross class Better Together and their “Project Fear” were but the latest refinement in the dark arts of duplicity that is their stock in trade.

As the days tick by towards the UK general election which seems to be moving inexorably to the doom of Scottish Labour and their erstwhile Lib Dem and Tory chums of last year, mounting panic is gripping the suave liars of Westminster.

Enter then, in a Dawn of the Dead moment, the Zombies of the supposedly deceased Better Together to unfold, yet again, their menu of dirty tricks.

In the wake of the leaders’ debates and the growth of Sturgeonmania they furiously treated us to screaming headlines about the “most dangerous woman in Britain” and multiple variations on the theme as they scrabbled to defend the unionist’s austerity agenda at the heart of Labour, Lib Dem and Tory programmes.

However modestly and reasonably tabled, the idea set out by Nicola Sturgeon, Leanne Wood of Plaid and the Greens Natalie Bennett that there might be an alternative to austerity came like a thunderbolt breaking the cosy cuts “no alternative” message from the Westminster elite.

And it was this breaching of the core cuts consensus and the upsurge of public support for that alternative view which led to the mobilisation of the undead against it. The predictable suspects at the Daily Mail (once supporters of Mosley’s pro-Hitler Blackshirts) ran their right wing bile with variations on the theme from the rest of the media pack but it was left to the supposedly “quality” Daily Telegraph to open its pages to the Zombies.

Perhaps before examining the Telegraph’s tawdry role we should recall the recent book by their Scottish man Alan Cochrane, a willing stooge of Britannia, in which he boasted of his role in spreading the manure for Better Together.

Thus, hot on the heels of the seven-way TV debate, the Telegraph broke an “exclusive” telling readers that Nicola Sturgeon had told the French ambassador that she favoured Cameron over Miliband for Prime Minster.

What a scoop!! In one fell swoop the carefully calibrated anti-Tory SNP message was exposed as a sham and desperate Labour chiefs—led by Miliband—seized on the tale like drowning men at straws as proof that the SNP are Tory supporters. However as the saying has it the tall tale went “up like a rocket and down like a stick” as first Sturgeon and then the French embassy denied that any such conversations had taken place.

Worse followed when it emerged that, in clear breach of normal practise, neither the French nor Sturgeon had been asked to comment before publication. Now it is clear that the “story” came from a Scottish Office civil servant answerable to Scottish Secretary Alistair Carmichael whose party, the flexible Lib Dems, are bywords for honesty and truth. Challenged on Channel Four, he once again showed that he is London’s man dismissing it as “one of those things”.

Amidst the clanging of Labour bosses deleting gleeful tweets and postings the Labour delight turned to gloom as one more Zombie bit the dust.

As 7 May approaches the significant development is that, despite the iron grip of big finance on all aspects of UK life from parliament to papers and TV, a glimpse of another way has broken the mass media blackout.

Socialists, Greens and the progressive movement have, of course argued for an alternative to austerity since the great crash but for millions of voters such policies are either unheard in the corporate media or presented (as with the SNP) as wild, unworkable, extremism transforming Scotland into North Korea.

Yet new polling shows that an alternative to austerity has considerable support among Scottish voters and the debate reaction shows this shared across much of the UK.

The policies needs to make this alternative a reality involve massive house building for rent, action to implement a £10-an-hour wage now and public ownership of key services as a step towards an economy putting people and planet before profit and greed.

The anti-austerity offer made during the debate is an opening towards such a politics but needs to go much further.

Working class Scotland is under the yoke of insecure, badly-paid work and slashed benefits and this is not an act of God but the outcome of 30 years of ruling class war on workers which made trade unions almost illegal and left workers at the mercy of profit-crazed bosses.

All the fruits of their dominance from zero hours contracts to plummeting wages are rooted in arrogant and unchallenged bosses power and winning back workers right to organise is an essential first step to challenging them.

Therefore, welcome as any defeat for the politics of austerity on 7 May will be, the left and progressive forces need to step up pressure for a united challenge for an alternative meeting peoples’ needs.
This is the case the SSP will be putting in the election and the case it will make after it. 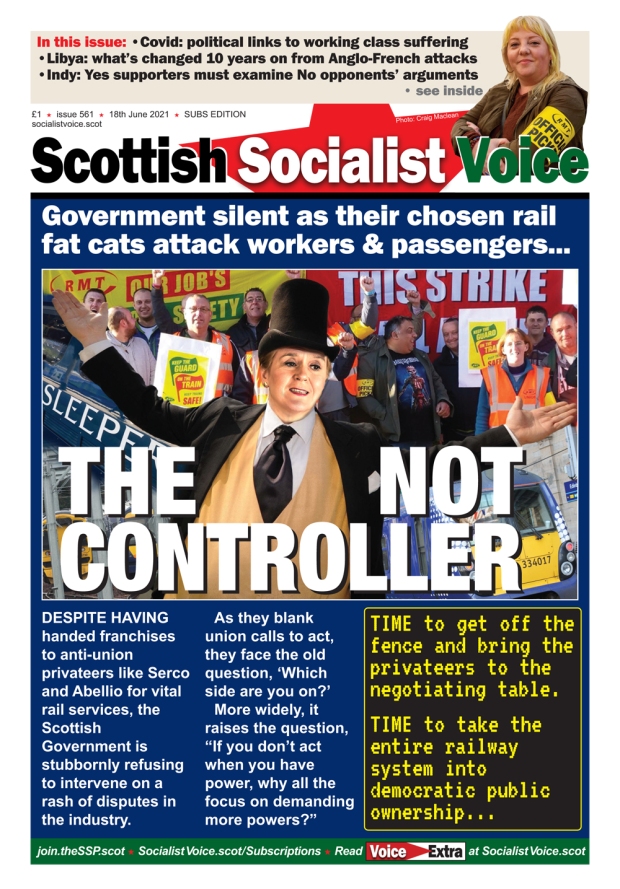