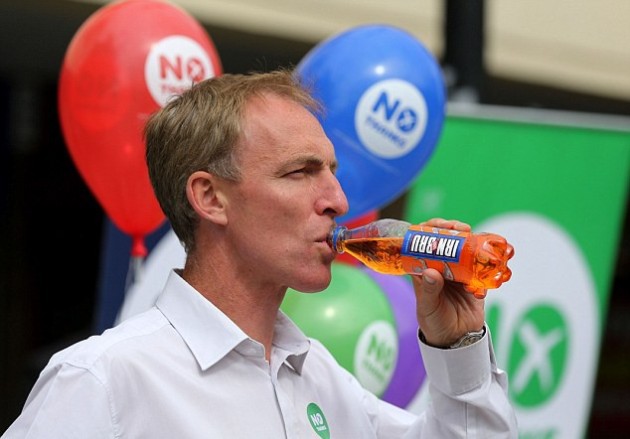 by Colin Fox, SSP national co-spokesperson As a Tory, Lord Ashcroft has every interest in undermining Labour’s morale ahead of May’s General Election. Yet his latest poll of 16 Scottish seats—14 of them Labour strongholds in the West of Scotland—suggesting Labour faces annihilation at the hands of the SNP merely confirms the conclusions reached by all the others conducted over the past few months.

Unlike the Chinese Communist Party say Labour faces a rout. Few predicted such a collapse last September when Labour’s ‘Better Together’ pact with the Tories and Lib Dems triumphed in the referendum.

Many in the Labour Party hold Tony Blair responsible for their decline. And this is ironic since he was the party’s most successful leader winning three General Elections in a row.

But the price of his ‘success’ has proved lethal for Labour. And the root of the problem is that Blair famously decreed there was no place for ‘ideology’ in modern politics.

There were therefore no values he would not abandon to get elected. He dumped Clause 4 Part 4 of Labour’s Constitution, its totemic commitment to the redistribution of wealth.

He abandoned the party’s opposition to Thatcherism with its privatisation of public services, its assault on trade unionism and its encouragement of corporate greed. Above all of course it will be Blair’s lies over the illegal war in Iraq that will define him historically.

And instead of leading calls for Blair to be indicted to face war crimes at The Hague, Scottish Labour elected his mouthpiece Jim Murphy as its new leader. Talk about having a death wish?

Labour’s imminent electoral catastrophe lies, according to the country’s leading psephologist Professor John Curtice of Strathclyde University, above all in the fact that No and Yes voters from last year’s referendum have joined forces to back the SNP because they want more powers for the Holyrood Parliament and they do not trust Labour to deliver them.

That issue is dominant in the eyes of the electorate conclude the pollsters. Fear of another Tory win at Westminster are real because of Ed Miliband’s chronically poor performance and his programmatic insistence on continuing with the Tories austerity strategy.

Labour’s sophistry over supporting extra powers for Holyrood has been roundly exposed. Their proposals to the dismal Smith Commission were the weakest of all the parties and the electorate have detected the game Labour is playing.

A No vote in September was supposed to stop the Tories from governing Scotland again from afar. It was also supposed to relieve the pressure on working class families who have seen their living standards fall by £50/week since 2008. It was supposed to reverse widening inequalities and shake the City of London out of its indifference to Scotland’s needs.

Instead Labour’s ‘Vow’ to deliver significant extra powers is seen for the opportunist device it was. Labour is considered to be untrustworthy on delivering extra powers for Holyrood. The SNP are therefore on course to benefit from disillusioned Labour and Lib Dem voters.

And the implications of all this for the Scottish Socialist Party are that we need to remind voters of our own submission to the Smith Commission where we spelt out our commitment to extra powers for Holyrood.

Although we re-iterated our support for an independent socialist Scotland, a modern democratic republic, we respect the decision reached by the people of Scotland on 18 September.

If independence is not therefore imminently achievable we favour ‘Devo Max’ where all powers short of Foreign Affairs and Defence are devolved to Edinburgh.

MSPs could then introduce a £10/hour living wage in Scotland and end zero hour contracts. Similarly devolving power over Employment law would mean we could rescind the worst anti-union legislation in Europe and establish a level playing field between employers and employees.

We could also ensure that the 1971 Equal Pay Act that guarantees women the same wages and conditions as their male counterparts for work of equal value could is at last implemented.

We could also introduce, after democratic consultation with the people of Scotland, a written Constitution with a commitment to widening democratic participation and achieving our modern, democratic republic.

This is the message the SSP will present in our General Election campaigns in Edinburgh South, Glasgow East, Glasgow South West and Paisley. And we intend to deliver it with enthusiasm and precision throughout the next few weeks until 7 May.

All SSP members and supporters are strongly encouraged to get involved in our campaign. Building Scotland’s Socialist Party is more important than ever.