by Colin Fox, SSP co-spokesperson Next week the Scottish Socialist Party will announce the seats we will contest in May’s General Election. Each of our candidates will be standing on an unashamedly socialist and pro-working class platform. We will be campaigning for a £10/hour living wage and an end to zero hour contracts, an end to the austerity that see working class people penalised for debts run up by reckless, greedy bankers and support for an independent socialist Scotland which goes hand in hand with our belief in a modern democratic republic.

The election result is presently too close to call with Labour and the Tories running neck and neck in the polls. Neither David Cameron nor Ed Miliband inspires much confidence in working class people. In circumstances where no party wins a majority the stage will be set for another Coalition Government.

Accordingly the Tories are making overtures to their right wing colleagues in UKIP, the Ulster Unionists and even the Lib Dems. Labour meanwhile has opened informal talks with the SNP, Plaid Cymru, The Greens and the ever promiscuous Lib Dems.

In Scotland the polls suggest Labour will lose most of its seats. Their decline, which the SSP has highlighted for more than a decade now, is fundamentally down to Tony Blair’s 1990s legacy where Labour represented ‘the end of ideology’. Consequently there was no principle Labour would not sell.

Blair’s abandonment of Clause Four, his u-turn on privatisation and his lies over the war in Iraq illustrate the point well as does Johann Lamont’s infamous attack on universal benefits. Each betrayal of working people and progressive ideas ate away at Labour’s soul. Now the party is rotten to the core and has been reduced to its backward backwaters and old corrupt redoubts.

Seeing this decomposition of the Labour Party many have rushed into the arms of the SNP in the belief that ‘anything is better than Labour’. Working in the cross party ‘Yes Scotland’ coalition these past 2 years however gave me the chance to see the SNP party machine up close.

I was certainly impressed by its professionalism, discipline and efficiency, but socialist it is not. For all their enmity towards the party of Jim Murphy the SNP are in fact very similar to Labour politically.

Every bit as neoliberal in economic terms the Nats are admittedly more left on social policy. Mind you as any novice of Scottish politics could point out being to the left of the Labour Party in Scotland is not difficult.

In this time of profound realignment in Scottish politics however it is vitally important people ‘keep the heid’ and not lose sight of fundamental principles. The SNP is no more socialist than Labour. And to be fair they have never claimed to be.

Nicola Sturgeon has never said she was a socialist as far as I’m aware. She is a corporate social democrat. The SNP are a capitalist party and happy to be so. When they refused to take ScotRail back into public ownership in November they did so, not as they claimed, because they did not have the powers, but because their corporate principles refused to countenance it as a sustainable course of action.

They also overturned their historic opposition to NATO after their defence spokesman Angus Robertson MP claimed in October 2012 ‘we cannot win the referendum with this policy’. Since the independence vote was lost with the policy many will logically ask when will the former policy be reinstated?

Equally the SNP want to reduce corporation tax. And they wish to maintain the monarchy and thus tie Scotland to an anti-democratic, un-elected, unaccountable and unrepresentative feudal Head of State.

The SNP are ideological nationalists who claim ‘we [Scots] are all ‘Jock Tamson’s bairns’ to obscure crucial socio-economic and class differences. But Scotland’s working class are exploited on a daily basis by ‘Jock Tamson’s’ other bairns, Scottish employers and the state they control.

The Scottish Socialist Party is different. We are committed to building an independent socialist Scotland where the nation’s wealth is evenly distributed and where the landowning classes, the corporations, the Edinburgh financiers, the Glasgow lawyers, the Perth businessmen, the Dundee technocrats and the Aberdeen oilmen fully understand their responsibility to serve society as a whole.

Unlike the SNP we are committed to emancipating working class people from the brutal exploitation of 21st century capitalism.

The SSP therefore has a crucial responsibility today to promote socialist ideas and further the interests of working class people. In that spirit all our General Election candidates are committed to advancing the socialist cause and building the mass party of socialism Scotland so desperately requires. 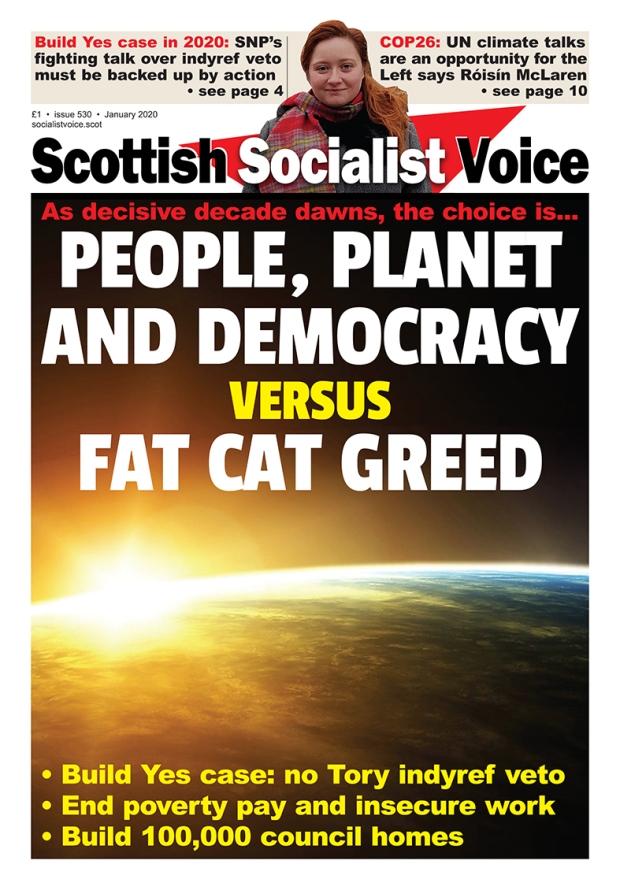