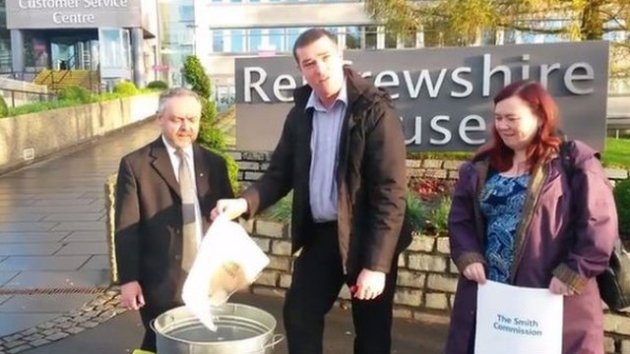 The SNP’s decision to suspend four of their councillors for burning a copy of the Smith Commission Report is completely wrong, undemocratic and an over the top reaction which panders to the right wing in both the SNP and the Labour Party.

Burning a copy of a report which contains proposals which are a sell out of the people in Scotland and emboldens the Unionists was a legitimate visual act of defiance and opposition, something which is part of our democracy and our right to protest.

Civil disobedience and acts of non violent direct action are legitimate in a democracy when almost half the population are treated with contempt after being guaranteed something very close to home rule but instead are only being offered crumbs from the Westminster table.

The suspension of these councillors demonstrates that while the SNP has gained thousands of new members as a result of the broad based Yes campaign, they remain a right wing capitalist party, wedded to the free market and the old way of doing politics. The faces may have changed but the policies and absolute control from the centre remains in place.

Contrast the vitriol directed at these elected councillors with the silence from the Labour Party and others in the Better Together campaign when the extreme right wing elements of the Unionist Orange Order burned the Saltire and made Nazi salutes whilst waving their ‘no surrender’ Union Jacks in George Square after the referendum vote, or the images on social media of Labour MSP Ian Gray ripping up a copy of the SNP’s manifesto. Not a cheep from Labour or their Tory partners about these incidents.

New Labour reek of hypocrisy and double standards so soon after being in bed with the Tories—something people in Scotland will not forget easily.