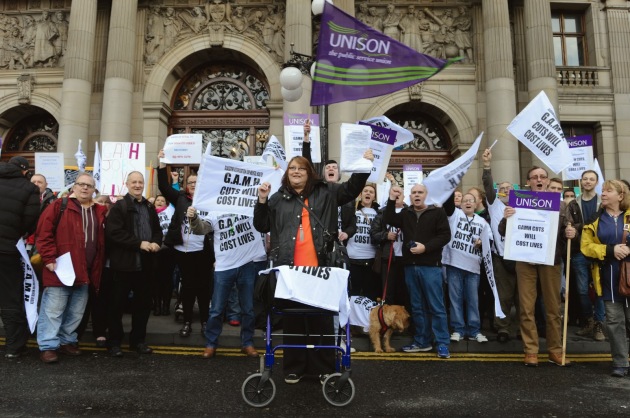 by Sandra Webster, SSP national co-spokesperson Recently we saw the extravaganza that is Children in Need, where a plenitude of celebrities urge us to donate to a charity which funds many projects for the most vulnerable. The irony is, like the good causes funded by The National Lottery, it is ordinary people who donate the most. Charities are becoming part of statutory services, providing services usually provided by local authorities.

Glasgow Association of Mental Health seem to be the next target of austerity cuts, as a 40 per cent cut to their budget next year threatens them with closure. This will again have the biggest impact on their service users who rely on the service for day to day support and accommodation.

One of the reasons for this is that local authorities such as Glasgow City Council have tendered their services to charities, then cut back the budget they give them. Councils can still say they are not making cuts to direct services. Some carers and service users have been critical of Glasgow Association of Mental Health. This is another cut to services to vulnerable adults. The Hamish Allen Centre was closed last year, and day services around Glasgow have been closed, with many more to come.

They have been accused of allowing direct payments, now called self directed support (SDS), to be rolled out to their service users.
Glasgow City Council have been accused of using SDS as a means of cuts. SDS, according to the legislation, should give power to people with disabilities and their carers.

The reality is that people cannot afford to fund existing care packages. Voluntary organisations have also began to campaign against the “care tax”. This is a payment which is a contribution to a service. ‘Sarah’ is a full time carer for her adult daughter who has schizophrenia. Until two years ago, her daughter attended a day centre four days a week. There was a minimum charge of five pounds a week for meals.Under the new system, she has been asked to pay £60 a week for her daughter to attend the same centre for three days a week.

“I can’t afford it” said Sarah. “This will put us into poverty. I need a break. I thought self directed support was meant to help us but it has made things worse.” Sarah’s daughter no longer attends the centre, which is causing a lot of household stress. The irony is if Sarah is no longer to care for her daughter, the cost of residential care will be in the region of at least £4000 a month.

A demonstration was held in Glasgow last week against the cuts to Glasgow Association of Mental Health’s budget. Around 500 people attended the largest protest since the Quarriers workers’ demonstration. Glasgow City council seem resolved to continue with the cuts, saying those “known to social work” will continue to receive a service.

The post-referendum climate is going to be a very cold one for the most vulnerable. Cuts to jobs and essential services will continue. These cuts are only the beginning. All over Scotland, SSP activists have been campaigning for a living wage, but I would also urge you to participate in actions of solidarity of those affected by the cuts, which will only continue to increase.

The thought of a 2015 General Election victory for the Tories and UKIP will mean even greater cuts, as the poor continue to be demonised. Folk who are service users and workers need our support. I know we will not let them or ourselves down.