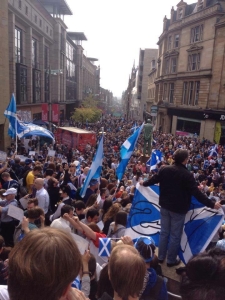 YOU YES YET? there is no virtue in spurning any opportunity to challenge the elite

by John Finnie MSP The votes have been counted and our tears have been shed. Yet, within hours of the result it was becoming apparent that far from the eternal triumph of the status quo, the referendum had left Scotland, and many in the wider UK too, fizzing with determination for change. Rather than the downward spiral of depression which would have been an understandable response to the referendum defeat, the invigorated Yes movement is already mounting up for the next stage of the campaign, with the three Yes parties – the Greens, the SNP and the SSP – seeing meteoric rises in their membership.

Now there is much talk of the campaign rolling into the 2015 UK General Election on 7 May behind Yes candidates. With all three parties rightly guarding their unique identity, how realistic is that?

Firstly, it would be important that the three parties recognise that there will be some in their ranks who would not wish to see that identity lost in the UK general election campaign.

By weight of numbers, you could envisage some in the SNP ranks would wish to go it alone or see themselves as having the right to have the other parties stand down.

Some in the SNP ranks might cite their constitution which, I understand, states they must contest each seat. Others might legitimately point out that ‘where there’s a will there’s a way,’ as was the case when the SNP chose not to contest Shetland giving the Shetland Movement access to all available non-Liberal votes.

I could see a much greater attraction to joint candidates from both the SSP and the Greens. Allocating winnable seats to credible candidates such as Colin Fox and Peter McColl would greatly enrich any collective campaign.

I imagine that the whole issue hangs on what future role, if any, there is for the wider Yes movement. Many Yes activists held no party political allegiance and were motivated by the opportunity to make things better.

To unionists who smugly invoke ‘the settled will of the Scottish people’ and expect I, and 1.6 million like me, to dispense with our notion of social and environmental justice within an independent Scotland, I say: dream on. We live in a liberal democracy and of course we respect the result, but our aspirations will never be extinguished.

Within a week, good old “Great” Britain had sorted that oil problem, agreed to fracking under your house and had us back at war. We said throughout that campaign that that’s what they do, but the pressing question now is: what will we do?

The public meetings haven’t ended, with queues out the door at branch meetings of all three Yes parties as re-energised Yes activists crave opportunities continue their campaign for change. Some Yes shops are staying open, and many of the self-organised groups that made up the Yes movement, such as Women for Independence and the Radical Independence Campaign, are still going strong. That momentum can – and must – be harnessed.

The key player will be Nicola Sturgeon, soon to be First Minister and Leader of the UK’s second-largest party. The 7th of May is not far off, and the parties are still to have their conferences. Will those conferences pick up on this energy? I hope so.

Let’s assume that the three Yes parties do agree a strategy for fighting next year’s UK election. How will they do it? An agreed division of the seats? An agreed agenda? Who will be consulted? It’s only a few months away and there will be no room for egos to hamper what could be a glorious opportunity.

Scotland has been ill-served by the Conservative/Lib Dem coalition. The once mighty, now rather pathetic, Labour Party is committed to a programme of continuing austerity. 60 per cent of those cuts are still to come, along with a new benefits attack on younger folk, while of course money is no object when it comes to the renewal of the UK’s nuclear arsenal.

Scots will have every reason to want to punish the parties that told them everything would be Better Together.

Have non-aligned politicians a role to play? Imagine Dennis Canavan standing in Falkirk or Charlie Kennedy facing former Lib Dem Council Leader, and Yes supporter, Michael Foxley in the Highlands? What an eclectic mix we could send to sort Westminster out!

When they get there, they would need to work in a way that respects the diversity of the movement that sent them. I’d favour some form of common agenda of essential principles, with the MPs given autonomy to deal with issues outwith that agenda as dictated by their own conscience and judgement.

Many might see this approach as being opportunistic. Yes, it is. The UK elite that continues to rule us extracts soaring profits for its own members, while over 200,000 Scots children languish in poverty and the queues at the food banks grow. There is no virtue in spurning any opportunity to challenge that elite.

Anyone who has seen footage of the young Scottish woman asking Ed Miliband and Joanne Lamont why they can afford to renew Trident while she can’t get a house, and watched Miliband walk off as if she meant nothing to him, saw the true face of Labour today.

And in the short period since our disappointment we’ve seen the Conservative government, which Labour refuse to meaningfully oppose, act exactly as we should expect: in the explicit interests of the few at a terrible cost to the many.

If there is a genuine will for Scotland to stand united in opposition to these unionist parties of the elites next May, it can happen. For the millions suffering under the heel of those parties, in Scotland and beyond, it must happen.