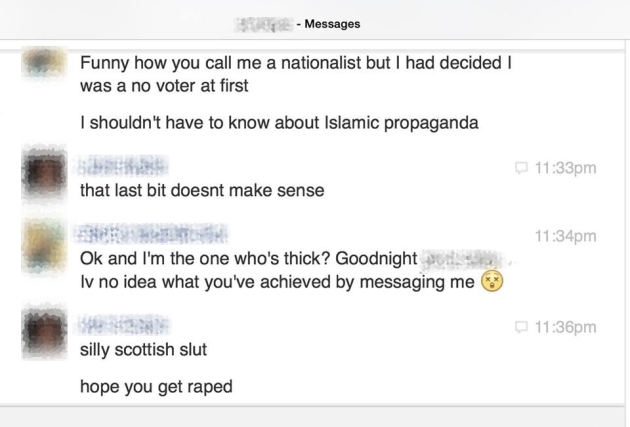 by Lynda Williamson, Newsnet Scotland There is a radiator salesman from Hadleigh in Suffolk named Phil Neville. Mr Neville recently received a torrent of abuse on social media – some comments expressed a wish for his speedy demise. His crime? He shares the same name as a particularly boring football pundit. Take a look at any discussion around football on social media and you won’t have to dig too deep to find some frank and robust exchanges of opinion.

I’ve even seen some truly vitriolic comments about Strictly on Facebook! The point is that there are a few numpties on the world wide web. Perhaps online persona have become like the avatars that some people create in fantasy computer worlds like Second Life enabling them to become the person online that they wish they were in real life. Who knows? That these people inhabit every area of social media should be a given, the evidence is there for anyone who takes a cursory glance to see, this should not be up for debate. But in one area and one area alone, it seems to be.

Online grassroots
The No Thanks campaign has nothing equivalent to Wings Over Scotland or Newsnet or Bella Caledonia or any of the myriad of Yes supporting sites.
There is also a kind of online grassroots movement and earlier this year research published by Glasgow University showed that the Yes campaign are romping to victory in the battle for social media.
No Thanks cannot afford to allow this to continue. They cannot beat the phenomenal Yes grassroots activists on the ground with Radical Independence and the SSP targeting the disaffected in our society, arguably the people who have most to benefit from a Yes vote in September . They need to neutralise the online grassroots effect. With that in mind they have embarked on a campaign to demonise the “cybernats”.
In this quest they are ably assisted by the mainstream media who gleefully report the inevitable transgressions of a small minority of Yes supporting fools while ignoring similar transgressions from the other side of the debate even from the pinnacle of the No Thanks hierarchy.
Furore when a certain lady was accused of having links to the Labour Party but deafening silence following Alistair Darling’s New Statesman interview when he accused independence supporters of being Nazis. The Nazi accusation is particularly common, it’s a lazy insult proffered by those devoid of imagination but it does keep cropping up with monotonous regularity.
Indeed it popped up once again with a future Labour candidate for election in Angus tweeting an image of German youngsters gathered under a Nazi banner in response to an image of five Scots youngsters pictured at an anti-bias rally. It seems that youth is no defence against the more vitriolic element of the modern Scottish Labour party and Kathy Wiles is a perfect example of that vitriol. While the Nazi insult is the most common it is by no means the only or the worst insult thrown at Yes supporters and ignored by those whose narrative it does not fit.
Coming hot on the heels was a similar incident when a No Thanks supporter hiding under the nickname of ‘Kilted Kelpie’ tweeted:
“The launch event of ‘Sex offenders for YES’ is tonight. There’s a Yes group for everyone.”
Beneath the text was a picture of Alex Salmond stood alongside a young woman with a banner headline which read ‘SEX OFFENDERS for Yes’.
When researching this article I asked some Yes supporting friends if they had experienced any abuse while online and was truly disturbed to discover that some low life had written a post on Facebook which read: “Silly Scottish slut… hope you get raped.”
Yet the mainstream media is reporting that Rory Bremner dislikes the “threats and bluster” of parts of the debate. He says “It’s almost deliberate, this intimidation, and I find that very sinister and unpleasant.”
Will reports of Labour election candidates equating Scots youngsters with Hitler Youth make it onto the pages of our newspapers?
But for me the truly baffling thing about all of this is the haste with which officials from the Yes campaign rush to apologise and condemn the numpties from the Yes side while staying eerily silent about abuse is thrown at their own supporters.
Of course they seek to distance themselves, perfectly understandably from abusers but surely they must defend the abused?
Though it’s a confident movement that thinks it can afford to alienate its own followers by staying silent on the issue, by trying to seem oh so reasonable, do the Yes campaign risk appearing to tacitly accept responsibility for online abuse?
I sure as hell hope they are not accepting it on my behalf, not after what I’ve witnessed after a few hours of research.
Of course the spokespeople for Yes must condemn whole heartedly any form of abuse, online or otherwise and we all have a duty to ourselves and to the wider movement to treat everybody we encounter with courtesy no matter how challenging that may be.

Unacceptable
But we must also expect, neigh demand swift and robust rebuttal of any suggestion that the problem of online abuse is unique to supporters of independence. That is the narrative of No Thanks and just unacceptable.
Online abuse is perpetrated by a small minority, the vast majority of us will never encounter any, if we do, there are facilities to block people on all the popular social media sites.
So let’s continue to win the online debate and let’s get out there and talk to people face to face – that’s how we will win the ultimate prize of independence for our country and it is there for the taking.